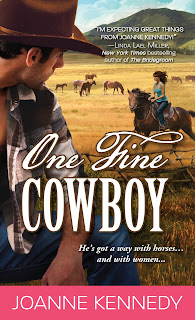 All good love stories are about change. After all, if the hero and the heroine know from the get-go that they're made for each other, what's the point in telling their story? You might as well get right to the good stuff!

But good stuff that comes without a struggle just isn't that good. Heroes and heroines have to fight to reach their goals - and they need a bigger goal than just finding love. They have to want something else: a rewarding career, or maybe peace of mind. Something that a relationship with each other would make even more unattainable.

But sometimes they learn that the goal they're so set on isn't what they really need.

That's what happens to heroine Charlie Banks in my September release, One Fine Cowboy. As the story begins, Charlie has a very definite goal - a plan with a capital "P." She's going to finish school, get her Ph.D. in psychology, and move on to some kind of rewarding work, probably in her home state of New Jersey.

When her advisor signs her up to attend a horse training clinic in Wyoming as part of a study on interspecies non-verbal communication, Charlie isn't sure how it fits in with The Plan. She loves animals, but she hates cowboys. As far as she's concerned, cowboys are ignorant rednecks who torture animals for their own amusement.

When she arrives at Latigo Ranch, the prospect dims even more. The quaint outpost shown in the clinic's glossy brochure turns out to be a tumbledown wreck scattered with sun-parched outbuildings. The place doesn't look anything like the advertisement.

That's because the brochure was a hoax perpetrated by the rancher's ambitious girlfriend. Hoping to share in the profits, she secretly sent out the brochure to force her reclusive horse-savvy honey into fame as a "horse whisperer." Now she's given up on him and gone, and horse lovers from all over the country are arriving at the ranch expecting a three-week workshop.

Horse trainer Nate Shawcross has no interest in teaching a bunch of greenhorns about his methods, but family issues forced him to mortgage the ranch and his girlfriend emptied his bank account. He's willing to do just about anything to save his home, but when he suffers an accident with a stack of hay bales and a renegade two-by-four, he's forced to rely on city girl Charlie for help.

The two of them couldn't be more different. Charlie faces the world with fists clenched and feet planted, ready for a fight; Nate confronts it with a clenched jaw and an unshakable determination to keep his emotions under control. But they have one thing in common: when it comes time to recover from their battles, they both gravitate toward the company of animals - and eventually, each other.

A lot of books are inspired by a premise, a theme, or a first line, but One Fine Cowboy was inspired by the characters. I don't know who Charlie and Nate are or where they come from. They aren't based even remotely on anyone I know, but they're as real to me as my best friends and it wouldn't surprise me a bit to run into them at the local feed store or a downtown diner. I love them both, but they have a lot to learn, and it was a challenge to bring them together!

How have you had to change to make a relationship work - and what do you refuse to change?