By Sharon Lathan May 14, 2010
This past Mother’s Day was lovely as my husband and children pampered with gifts and food. However, it was also sad since I lost my own mom in September. My sister and I planned a long chat to reminisce and cry, but in the end neither of us picked up the phone! I suppose it isn’t a surprise then that I am not feeling overly inspired to talk about the topic of motherhood as it applies to me. Thankfully I realized my blog date falls smack dab between our May themes of motherhood and new beginnings. Of course, many of the aspects involving motherhood include new beginnings – which is why we chose these themes – so it isn’t difficult to span the gap between the two. So I have decided to approach these themes as they relate to my novels and the world of Jane Austen.

Even a cursory glance at the mothers who inhabit Austen’s novels would lead to the conclusion that the only good mother to be found is a dead one! In Northanger Abbey Austen wrote in an explanation on the qualities of Catherine Morland’s mother, “She had three sons before Catherine was born; and instead of dying in bringing the latter into the world, as any body might expect, she still lived on.” Commentaries suggest this was Austen’s way of poking fun at the fact that literary heroines typically have mothers who are either atrocious or deceased. Loucinda touched on this subject earlier this week. Austen seemed to know this “rule” since there isn’t a single heroine in her novels with a perfect mother. Not all of them were horrid necessarily. For instance Mrs. Morland was merely busy birthing baby after baby and thus not completely involved with her older children, but is described as very loving. Surrogate mother Lady Russell in Persuasion loved Anne Elliott, but was overbearing in her approach, forcing Anne’s hand in refusing Captain Wentworth. Sense and Sensibility gave us Mrs. Dashwood, who so devotedly loved her daughters that she was unable to discipline or instruct. 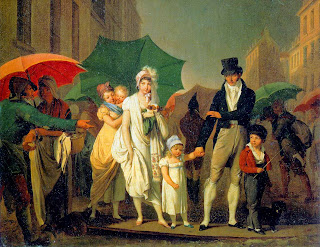 On the other end of the spectrum are the truly heinous mothers of Mansfield Park – all of them - and who can forget Mrs. Bennet? Yikes! Was Austen merely following a literary tradition of bad parents? Perhaps. Yet there is tremendous evidence that Austen herself did not have an adequate mother in Mrs. Austen and that their relationship was strained, to say the least. Whatever Austen’s reasoning for writing her heroines’ mothers as she did, it would be wrong to say she hated motherhood, just as it would be wrong to assert she hated marriage based on the terrible marriages seen in her novels.

Each novel’s heroine managed to discover true love with equality, respect, and esteem as the bedrock despite the bad example offered by their parents. Presumably they would therefore be better mothers having learned from those errors as well. The fact that Austen dwelt on both topics quite a bit proves that she was acutely aware of the differences and the importance. In both the case of marriage and parenthood, we do see fabulous examples within the texts from supporting characters presented in stark contrast to the negative. Austen never married or had children, yet it is logical to conclude from her novels and her private letters that she revered both and had a firm grasp on how each should be.

In deciding to take on the task of writing a sequel to Pride and Prejudice, my saga is all about new beginnings. First I had to address my vision of marriage for Mr. Darcy and Elizabeth Bennet starting from day one onward. For me there was never a question that Austen meant for them to be happy since their union was one containing all the elements of a good match and I explore this ideal wholeheartedly!

But how would they be as parents? 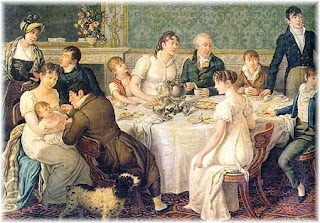 We never learn much about Darcy other than that his parents spoiled him, encouraging selfishness and arrogance. Since this brought him a fair amount of grief, I assume he would raise his children to be more tolerant and humble, being careful to not lavish them undeservedly while teaching of the wider world beyond his narrow sphere. Otherwise Mr. Darcy and Lady Anne Darcy appeared to have done a great job raising their two children.

Mr. and Mrs. Bennet possessed so many faults as parents it is impossible to cover them all in this blog! Heading the list of ways to not be like mom and dad, let us pray that Lizzy would exert more control over her children! Discipline would be essential with manners, propriety, respect, morality, and self-control part of the curriculum. I think the Darcys would be devoted to their children, involved in their day-to-day lives, active in providing a rounded education, and encouraging of self expression (we are talking about Lizzy Bennet after all). 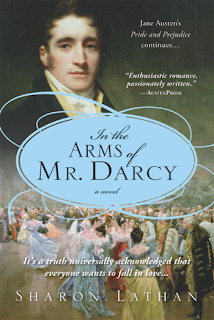 I have written an extensive, diverse community of family and friends for the Darcy children who appear in my upcoming stories: In The Arms of Mr. Darcy due in October and A Darcy Christmas in November. No doubt I am more of an optimist where Austen tended toward cynicism, and some may find this unforgivable or boring. But then I look at my own children who are marvelous examples of how excellently young people can mature - just as I look at my marriage of 24 years – and I know it is isn’t a fantasy.