A Breath of Fresh Air Supply 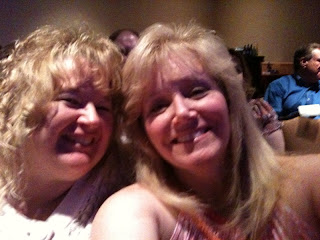 The theme for the end of May is new beginnings, but instead of a new beginning, what about going back to a beginning? Back to where where life was just beginning.

I had a family emergency over the weekend and couldn't do my scheduled Saturday blog post. Many many thanks to my Casa sisters for jumping in and taking over for me. The emergency was over on Saturday and that brings me to my "back to a beginning."

After the emergency, I had a lot of emotions, a lot of things to deal with. And I had concert tickets for an Air Supply concert. The question was whether or not I was going to go. After what had happened, actually, going was the best thing I could have done.

My best friend since high school had gotten the tickets. She and I were huge Air Supply fans in high school. We had every album, knew every song in order on those albums, knew the words to every song. We'd seen them numerous times in concert as seventeen and eighteen-year-olds, so when she saw they were coming to the area, she called me up and asked if I wanted to go. "Yes," popped out of my mouth before I'd even thought about it.

We were so young in those days. So full of expectations. Where would life lead us? Who would we become? Who would we find in our life? What would our families be like? Air Supply's songs are very romantic, full of falling in love, wanting to be in love. Whether or not you're a fan of the music, if you read the words, you'll see the emotions. As two teenage girls, these words touched us. It's really no surprise that I became a romance author, because I was a huge romance reader and following this group was just a part of that.

So, regardless of the events of the weekend, I was going to go to that concert. And I am so utterly thrilled that I did. The venue was much smaller than when we'd seen them 20-some years ago. Russell Hitchcock's hair was grayer, the band members were younger, the notes couldn't be held quite as long, but the voices were there. The excitement was there. The emotions were there. And we knew all the words to the old songs, though none of the four new ones they played. (Note to self: buy the new album.)

I escaped from the aftermath of the emergency. I went back to that time of innocence and expectation and hope. For a few hours, I got to relive the past. And it was a lot of fun. No one knows you quite like your high school buddies. All the silly stuff, the inside jokes, the stupid references, the giddiness of what happened at the school lunch tables.

The picture is of my and my friend, Val, at Harrah's Casino in Chester before the performance started. You might remember that I dedicated Wild Blue Under to her and named the heroine after her. There were lots of reasons that I did so, but the biggest being, she's my friend. Knows all my foibles and shortcomings and likes me in spite of them - and vice versa. We've known each other thirty years - and while new beginnings can be exciting and fun and something to look forward to, don't discount the past.

It was so nice to escape to it for a few hours.

Do you still keep in touch with those people who knew you "back when"? If not, have you searched for them? Facebook is great for connecting with people from high school; I've really enjoyed that, how about you?