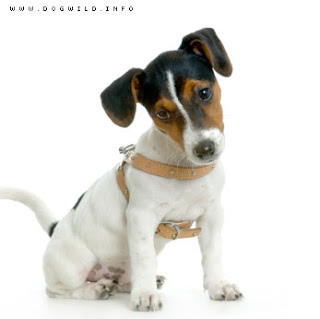 It surprises me that I write romantic comedies.

I never thought of myself as a particularly amusing person, but when I sit down to write, the funny takes over. Maybe it's because I write about cowboys, and cowboys are inherently funny. For starters, they wear chaps--which are, without a doubt, the most absurd garment ever invented. The sexiest, maybe, but also the funniest. They're basically pants without a seat.

It's hard to judge your own humor, but this is one of my favorite funny scenes from "Cowboy Trouble."
Here's the setup: Our heroine, Libby, has told her new (and very attractive) neighbor that she has a ferocious guard dog named Ivan the Terrible--just in case the guy's considerable charm turns out to be of the Ted Bundy variety. She decides a dog is actually a good idea, so she goes to the local shelter--and ends up adopting a 15-pound Jack Russell Terrier. When Luke comes over the next day, she shoves the dog in the pantry so he won't see it. ____________________________________________________
Taking off his Stetson, Luke glanced around the front room. She'd cleaned the place up, hung some pictures on the wall. It looked better--almost homey, despite the evil sofa lurking in the far corner.
He was still fooling with his hat, trying to come up with some polite conversation, when a loud crash sounded from the pantry.
He spun to face the sound. "What was that?"
"Uh...rats," Libby said.
"Yikes." He cringed. The vermin had to be huge to make a racket like that. "That's awful."
"You have no idea," she said, but a smile tweaked the corners of her mouth. Well, at least she wasn't afraid of animals, like some women.
Not even rats.
A high-pitched whine pierced the air, followed by a volley of yapping barks that clearly emanated from the supposedly rat-infested pantry.
"That's a rat?" He lifted a doubting eyebrow.
"I, um, I put Ivan in there. To catch them," she said.
There was another crash, then a series of loud thumps. It sounded like all her canned goods were cascading to the floor. Another series of yaps pierced the air.
"He sure doesn't sound big," Luke said. "He sounds like a poodle."
"Oh, he's no poodle," Libby said. "Definitely not a poodle."
Luke's curiosity was piqued. He couldn't picture those yapper-dog yelps coming from anything bigger than a shih tzu. "Maybe you'd better let him out."
"No way." She shook her head. "Not with you here. He bites first, asks questions later."
A frantic flurry of scrabbling hit the pantry door. It sounded like it might be a rat, but then it let out one of those half-assed barks.
"What kind of dog is he again?" Luke asked.
"Not sure," Libby said. "Some grizzly bear, maybe a little pony."
She could feel Luke watching her, his gaze pleasant but penetrating. He hadn't shaved for a day or two.
Stubble suited him.
"So," he said. "Farming, murder--what else gets you excited?"
She started to say "stubble," but thought better of it and shrugged.
"Maybe rat traps?" he asked. "You've got a real problem there."
He was right. But the problem wasn't rats. The problem was that she was a psycho fibber, and she couldn't seem to stop. She kept digging her grave of lies deeper and deeper, and it was past time to find a way out.
Maybe she could convince him that Penny was a rat. The little dog looked kind of like a rat, and was about the same size. Then she could act really surprised and say Ivan must have disappeared somehow. She could tell him the pantry was the new door to Narnia.
Or she could just change the subject. ____________________________________________________
In case you're worried, Libby does eventually come clean about the dog. But it costs her big-time. Luke doesn't make it easy.
And that's funny too.