By Joanne Kennedy February 13, 2010
Our theme for the month is love -- but what I'd like to talk about is luv. You know, those secret passions we nursed in middle school. All those hours we spent daydreaming of fantasy boyfriends back in seventh grade were the perfect preparation for the rigors of romance writing.

Of course, our dream dates weren't entirely fictional; they were generally based on real people. For instance, when I was twelve, all my friends were in love with Donny Osmond and David Cassidy.

I wasn't. I was a geeky little kid who listened to a lot of classical music, and I was smart enough to know that Down By the Lazy River and I Think I Love You were not going to stand the test of time. I also thought shiny hair and perfect teeth were way overrated. I wanted a man with brains.

That's why I fell in love with Jacques Cousteau.

My friends laughed at my secret crush. They saw Jacques as a wizend little French guy in Speedos and a beanie who was baked to a crisp by a lifetime in the sun and probably smelled faintly of fish.

But to me, he was the perfect man. He was smart, he had an accent, he owned a really cool boat, and his life was one long, fascinating cruise vacation. What did Donny Osmond have to offer compared to that?


And my grand passion for Jacques was great practice for writing romance novels -- because if I can turn an elderly French oceanographer into an object of lust, imagine what I can do with a cowboy! 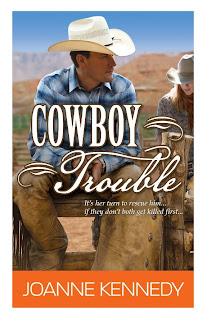 After March 2nd, you won't have to. That's when Cowboy Trouble hits the shelves, and you get to meet Luke Rawlins. Luke is a genuine Wyoming cowboy who looks like Elvis, talks like John Wayne, cooks like Martha Stewart, and is almost impossible to resist. He was cooked up using my fail-proof recipe for romantic heroes, using three all-important ingredients:

1. A story. Heroes are all about action, so you've got to give your guy a story. In Cowboy Trouble, it's "city girl meets cowboy." In my second book, One Fine Cowboy, it's "PETA activist meets cowboy." Sensing a theme here? Yeah, I like cowboys. As far as I'm concerned, if you start with a cowboy, you pretty much can't lose.

2. Innate physical hotness! It's usually easy for me to picture my hero. In most cases, he springs fully formed into my head, like Athena from the mind of Zeus, only way more masculine and not nearly as wise or all-knowing (because that would be annoying). He's usually based on someone I know, or someone who caught my eye in a coffee shop. I clean him up, dress him in cowboy duds, and turn all his flaws into unique and appealing quirks. Too bad we can't do that in real life!

3. Love. We're talking romance here, so how the hero interacts with the heroine is the heart of the book. No matter how tall, dark and handsome a man might be, it's his capacity for commitment that makes him the perfect fantasy boyfriend. And Luke not only conquers every obstacle fate throws in his way to win my heroine's heart; he does it wearing chaps -- which, as you know, were created by the early cowboys to showcase a man's best assets.

I suspect Jacques might not have been the romantic ideal I conjured up in my addled adolescent mind. I think he was one of those guys who was in love with his work, and he really did bear a striking resembance to a rawhide dog chew, so I'm not sure any amount of skill would turn my favorite Frenchman into a hero for the masses.

But a cowboy? That was easy.

So who was your fantasy boyfriend when you were a tween -- and why?