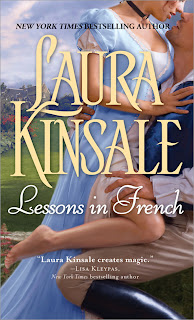 Good Morning Everyone--please give a warm Casababe welcome to Laura Kinsale, stopping by the Casa blog to talk about the launch of her newest book in over 5 years, LESSONS IN FRENCH! And while you're at it--take a minute to check out her newly re-vamped website: http://www.laurakinsale.com/ and also follower her on twitter: http://www.twitter.com/laurakinsale!


When babies were christened in the 19th century, they almost always had a godparent to sponsor their baptism. These days the term is used more broadly; it often describes a special person who takes particular interest in a child.

Well, my book Lessons in French has a godmother. It's Deb Werksman, my editor at Sourcebooks.

Like most books, it started as a manuscript with an entirely different working title. It's a book I wrote for fun, in tribute to Georgette Heyer's Regencies, knowing from the start that it was a departure from my usual very intense style. I didn't want a deadline, so I didn't have a contract for it. I knew that it might surprise some editors who would expect a "big, dark book" from Laura Kinsale.

It did seem this manuscript had a bit of trouble finding its proper place in the world, like one of those day-dreamy fun-loving kids who just don't quite fit in where adults expect them to. I wasn't comfortable with any of the offers I received for it at the time, and I also felt that I wasn't quite satisfied with the ending, so I asked my agent to stop sending it out for the time being. I put it away in a drawer (or what passes for a drawer on a computer) and proceeded to forget about it, except for the occasional thought that I needed to fix that ending some day.

I have a mind like a sieve. When several years had passed, and Deb called my agent asking to buy the manuscript, I had not even looked at it for all that time. She called it "funny and poignant." I just thought, oh yeah, I need to fix that ending. So finally I pulled it out and sat down and read it.

Readers may not believe this, but it quite possible for a writer to totally forget an entire book that they wrote. At least it is for me. I read the manuscript that became Lessons in French as if it were a book I'd never seen before. Forgive me if this sounds goofy, but it was as if someone else had written it. I laughed at my own jokes, I fell in love with my own characters, and I totally surprised myself with the ending--which apparently I had fixed somewhere along the way.

So maybe there is a muse after all, and she's at work while I'm asleep or something. (I did sometimes come in and find my computer on in the morning, when I was sure I'd turned it off the night before.)

I think Deb's description of Callie and Trev and Hubert the bull and their whimsical adventures is perfect. I hope the book is funny, and it does have an undertone of poignant longing and memory. (Good thing Callie and Trev aren't me, and actually remember one another when they meet again after 9 years!)

Lessons in French deserves its fairy godmother and its day in the sun, and thanks to Deb, it has both. It's now on the shelves and ready for download. If it makes readers smile and laugh and feel good about the world, I'm be glad and grateful to the editor, Deb, and publisher, Dominique, who made that happen.

Thank you for visiting Laura! We'll be giving away 5 copies of LESSONS IN FRENCH to 5 lucky commenters. Tell us about you're very own "fairy godmother moments"--or perhaps when you would have liked to have had one! Be sure to leave your email address to be entered, and we'll contact you to let you know you've won!