February is for lovers??? 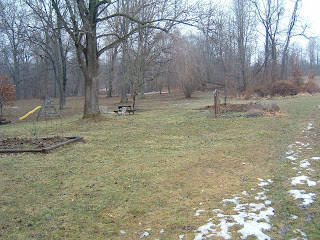 Ever wonder why February is the month for love? It certainly couldn't be because of the lovely weather. I took this picture in my back yard on Monday, and I don't know about you, but I don't see anything there to inspire romance. It probably isn't just because there was once a fertility festival that took place in in that month, either--although there again, why February???

To be perfectly frank about it, February is the time of year when love is the very last thing on my mind, and as a time for conception, it basically sucks. Think about it. Children conceived in February would be born in chilly November with the rest of the winter to survive as an infant being nursed by a mother who, particularly in olden times, probably isn't getting her full daily allowance of anything nutrition-wise, and sunlight (as you can see from my gloomy photo) is sadly lacking.

That being the case, I think February might have been chosen simply because there's nothing better to do, and nothing in particular going on. You're stuck in your house/cabin/castle for the winter, and if you're ever going to prove you love someone, that's when your love is put to its most severe test. I get really crabby in February, and if my DH was ever going to give up on me, it would probably be on Valentine's Day or shortly thereafter.

He's stuck it out with me for more than thirty Februarys, however, and he proves his love in so many ways. He puts wood on the porch so I can keep the fire going so we won't freeze. He feeds the horses for me when I can barely drag myself out of bed. He is happy with anything I feed him because he knows he's lucky to be getting anything at all. And, last, but certainly not least, he still loves me even though I never lost the weight I gained at Christmas and gives me candy in spite of that fact. I could go on, but you get the idea.

Perhaps February is the month for love because it's the time when we first get an inkling that Spring might, indeed, be on the way. A week or so ago, I left the hospital one morning and got my first whiff of Spring. The snow was melting, and there was that certain something in the air that promised better things to come. Later that week, it actually rained instead of dumping more snow on us, but now we have the mud to contend with.

But the mud will eventually dry out and then I can plant those vegetable seeds I bought a few weeks back when I was feeling quite desperate. At least there were green, growing things printed on the packages. March is coming on Monday and Spring will officially arrive in just 23 more days.