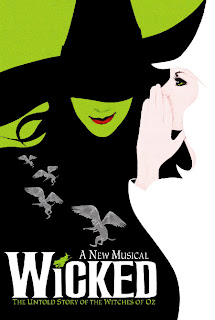 If you've read my bio, you know that I'm a big fan of fairy tales. Heck, if you even glanced at my website, you'll see my tagline, fairy tales with a twist, in the header. But I don't just mean the traditional Cinderella, or Sleeping Beauty. I also love the classics, of which Wizard of Oz is one of them.

In elementary school, we had the whole L. Frank Baum series in our library. And I read 'em. Boy, did I read them!

And when the show would come on, once a year, it was a huge event in our house. Popcorn and pjs, sleeping bags on the floor in front of the tv, and staying up late. I was terrified of Elmira Gulch (who, sad to say, had more than a striking resemblance to my late music teacher who came to my house every Wednesday night for organ lessons), loved Glinda the Good Witch's dress, wished I was one of the ballerinas, and wanted a Toto all of my own. (Later got him, by way of a miniature poodle that Mom insisted we name Jamie. But he was THE best dog!) And let us not forget that Dorothy's real name is Judy.

So, when Mom surprised me with tickets for Wicked as an early birthday present, to say I was excited would be an understatement. I even went out and bought the book--I'd had it on my TBR list, but I've got tons of things on my TBR list. But these tickets moved that book up the list.

I started the book, knowing there were some political overtones. I didn't know much else about the story--and no spoilers here--other than it's about the witches as girls and how they became who they became. Other than that, nothing.

Once I started reading the book, I was a little less enthusiastic to see the show. It read, to me, like Orwell's Animal Farm, and I only finished that book because it was a class assignment. Thankfully, one of my writing friends told me to put the book down and read it after I saw the show. She said I would love the show.

It was wonderful! Beautifully done!!! I had no idea there'd be the humor! The songs! The story! The characters! I kept saying to my mom that it was so sad that I was liking Elphaba (Wicked Witch of the West) because we know what happens to her.

Boy, was I wrong. The story was so well crafted, the actresses were unbelievable ("It's Ga-linda. With a 'Ga.'") There was no shame in knowing anything about what happens to anyone.

The coup de grace, however, and the reason my friend said she knew I'd love it: the nods to the original story.

In my Mer series, and now in the Genie series, I do "nods". To many things. And they make me giggle as I hope they do to others. Judging by the reaction of the audience at Wicked, more people than just I like "nods."

Here's one that popped up in Catch of a Lifetime that still has me both giggling and rolling my eyes. I honestly have to say I didn't plan this - I was naming the shark after the city in Jersey he reminded me of: Atlantic City. Where it went from there... that's the beauty of writing.


Harry swung his tail back and forth, lining up his troops a hundred meters offshore. The sun had crept over the horizon, beginning the countdown to sunset.

Angel's time on land was limited.

“So how long do we have to wait here?” A.C., the most recent addition to the pack he’d recruited off the coast of New Jersey, didn’t like taking things on faith, and the bad-ass attitude was starting to piss Harry off. The kid thought he knew it all, but then, the young always did. Harry eyed the tail. For a self-titled tough guy, A.C. was short on battle scars. He’d had an entourage, which was what had caught Harry’s attention in the first place, but the shark wasn’t living up to his own press. Nah, Mr. A.C. Hammer could take that punk demeanor and stick a harpoon in it. Harry was the boss here. He called the shots, and if the kid didn’t learn to take orders, he’d be out on his tail.

“Okay, guys, here’s the plan.” Harry eyed the rest of the Hammerheads he’d assembled. Seven of the most battle-scarred, meanest bounty-hunting ’Heads he could find. “We’re going in, in sphere formation, the opening closest to shore. That’s where we’ll herd her, but no one takes a bite.”

“What in Hades is this?” A.C. added a swagger to his stroke. “I didn’t sign on to be a shepherd.”

“You’ll be whatever I say you are and like it.” Harry went snout to snout with the kid.

But the kid didn’t back down. “So if we’re not taking a bite, what are we going to do with her? She’ll start singing bloody murder, and we’ll end up with a feeding frenzy around us.”

“You only get a feeding frenzy if you actually bite her, punk.” Harry considered shredding the kid just to make a point to the others, but he’d recruited lean and couldn’t afford to lose one member of the formation. Angel, for all her Human studies, was one smart Mer when it came to tactical maneuvers. All the Tritones were. Their father, Fisher, had seen to it. Probably for just this reason. Sharks weren’t known for taking direction well from Mers. Especially when the members of The Oceanic Council didn’t give them one ounce of say in governing the oceans. Not even a seat on The Council. Even after Vincent had saved the day all those selinos ago—much as it pained Harry to admit it, he’d thought The Council would recognize the rights of chondrichthyes. But no.

“So what are we supposed to do with her?” Gianni, another recruit, asked.

Great. Just what he needed. A mutiny of the bounty hunters.

“She’s our ticket in. The Council will realize we mean business.”

“So we’re not going to eat her?” Lou, a hunter lured out of retirement by the promise of a royal target, started frothing at the mouth—never a good sign. “Then why did you trawl me along, Har? This is bullsharkshit.”

Okay, so maybe Harry hadn’t exactly explained what this job would entail. But, dammit, he’d needed the best, and Lou was it. Too bad Lou had settled down to raise little ’Heads. But that’s what you did when you landed a trophy wife apparently.

Harry couldn’t see it. Lou’s mate had more air between her eyes than water, but, hey, to each his own.

“Look, we can eat her, just not right off the beach. Give me some bargaining power, and if The Council doesn’t cave, you each get a bite. But if we turn her into chum right away, we lose any hope of negotiation and will put ourselves on the endangered list. Fisher will be back in the hot seat and rally his troops out in full force, so let’s not do anything rash.”

“Rash?” A.C. rolled his eyes. “Rash was following you off on this wild grouper chase. I’m outta here.”

Harry flicked his tail, propelling himself in front of the deserter. He inhaled enough water to inflate his gills to three times their normal size. He could do intimidating better than any punk kid.

“You aren’t going anywhere. You signed on for this, and you’ll finish it.” Harry grinned, all of his teeth gleaming white. He knew because he’d paid those Spanish hogfish to do an extra good job. Intimidation could work wonders in a showdown. He wasn’t about to get beat by this piece of floating garbage.

“Before this is over, The Council will acknowledge us. They will hear us out, and they will pay attention.” He stared A.C. back into the lineup. “It’s time we sharks got what we deserve.”

So, who else does "nods" that you can think of? (Funny, on any other day, I could name a good 10 people; the day I have to write this blog, I can't come up with one!)