In Praise of Clutter.... 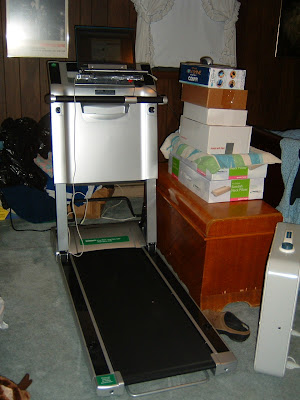 There comes a time when clutter can be very useful. Case in point, when I needed a place to rest my mouse on as I was about to write this post from the questionable comfort of my new treadmill, I didn't have to look any further than the top of my dresser, which, thankfully, is not visible in this picture.

Suffice it to say that it sits just two feet to my left as I walk. And, yes, I am walking at 1.5 mph at this very moment. I'm more comfortable walking a bit faster than that, but my keyboarding accuracy diminishes exponentially with each tenth of a mph increase in speed. Thus, I am limited.

To begin the saga of the treadmill, I decided that having one close by when I needed a break from the computer would be a good thing. My weight and blood sugar have been steadily climbing since I began spending so much time at my desk, and after reading Robin's post about her "walking desk" I decided that having a treadmill would be a good thing. The only problem was lack of space.

After looking at Dick's huge monsters (and, yes, that pun was intended!) I had about given up finding one that would take up about as much area as the rocking chair that used to sit at the foot of my bed next to the cedar chest. But my trusty DH and websurfer extraordinaire finally found one for me. We ordered it from Amazon in November and after a few false starts, it was finally delivered by a nice young fellow who smelled amazingly good. I had to meet him at the end of the driveway with my truck since he was driving a semi which wouldn't easily pass down the lane to my house, so I got to ride with him in my truck and get a really GOOD whiff of him. But I digress. . .

I had to work for the next few days, so it was later that weekend before we got my new toy out of the box, only to discover that it didn't work. At least, not the way it was supposed to. There was no such thing as a steady pace, and it would speed up and slow down in a manner destined to make me fall on my butt eventually. Aside from that, the heart rate monitor would read 50-70 whether my finger was on it or not. Something had to be done!

The service department was contacted, and a technician finally returned my call. He diagnosed the problem by having me hold the phone near the motor while it was running. He then shipped us the needed parts and the real trouble began: getting a repairman who covers all of southern Indiana to show up at my house on a day that worked for both of us.

He originally planned to come on Dec 12th, but the day came and went without him. Then Christmas arrived and my DH gave me this nifty shelf for my computer, plus a handy gadget to hold a book open, should I ever decide to read a book while I was exercising. I had new CD's to put on my MP3 player (the treadmill has speakers!) so that I would have music to walk by, but still, I had to wait.

We rescheduled him for the 29th, but he got pneumonia instead.

Eventually his health improved and he came on January 9th while I was at my INRWA meeting. He came with two other guys, replaced the circuit board in about fifteen minutes, and, voila, it worked! Then I checked the previously unopened box of parts; the technician had sent every possible electrical component on the entire assembly, including another motor, which was good, because though the repairman had assured us that the heart monitor worked, it didn't. My DH and I wound up replacing the sensor, which, unfortunately, only works when you are standing still.

But now I'm walking and writing and am back to the subject of clutter. I have now discovered a use for all of those boxes of old printed manuscripts. Look closely at the stack to the right. Yep, you got it; all filled with original Cheryl Brooks manuscripts, except for the spare hairdryer on top. So, to all of you writers out there, the moral of the blog is this:

Never throw away an old manuscript. You never know when you might need a shelf for your mouse!