Do You Remember Mix-Tapes? 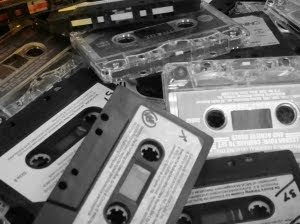 
I was reading a blog recently and the author mentioned finding a box of his cassette tapes, most of which were mix-tapes. My mind immediately went back to my teenage days when conversations revolved around who liked who, how lame Barry Manilow was, and how hot Jim Morrison looked before he died. Now, he died well before I was into him and the Doors, but still, you have to admit he sure looked hot before he died…well, maybe not just before he died, but you know what I mean. Back then, if I was not making mix-tapes, I was listening to the tapes my boyfriend dejour, best friend, or I made.

What about you? Do you remember the hours you spent picking the favorite songs? Wondering what the guy you were crushing on, or a guy you were dating—would think of your hard work. If a guy made me a mix-tape, I knew he was hooked. Why I didn’t think the same rule pertained to me is still a mystery. Making a mix-tape for someone was a big deal. It wasn’t something you made for a casual date. In a way, these mix-tapes, for me at least, were musical love letters.

I remember hanging out in my sister’s bedroom (she had the stereo) sitting cross-legged on her blue carpet among a sea of album covers. I’d spend hours making lists of the perfect songs only to spend almost as much time deciding on the proper order and pacing of the songs. I’d calculate the song times to see if I had a close-to-perfect fit for a 90-minute Memorex, and shuffle the songs around if I didn’t. The taping itself was a stressful time. I’d count 4-second spaces between songs and pray that the sound of me pressing the record button wouldn’t make it onto the tape.

Today kid’s sit in front of the TV playing video games, or listening to their iPods. We’d listen to albums over and over again. I literally wore out albums and even now, at the end of certain songs, I automatically start singing the next song on the album. I spent hours reading the liner notes learning every word to every song. I dissected music like English majors dissect Austen, Shakespeare and Longfellow.

Music has always been the soundtrack of my life. When my parent’s divorced, I have a memory of sitting behind humongous speakers and crying to a song about a couple getting divorced. Every pivotal moment, relationship, and turning point in my life can be tied to a song. When two friends died in a plane crash, Billy Joel’s Only the Good Die Young was played over and over and over again along with the songs we listened to together while I mourned their loss. Every time I’d move, I’d listen to a mix-tape that would remind me of the home and friends I had just left. When I started dating and working with musicians, I’d listen to their demo tapes. I remember a particularly arduous trip moving from Philadelphia to Florida. I listened to the tape of my ex-boyfriend’s band for almost the entire 16-hour trip.

Mix-tapes were also statements of who we were and how we felt. I made tapes for a parties. One of the most memorable or the least depending upon how you look at it was Tequila Night. The party was renamed Tequila Weekend since everyone brought a bottle and somehow finished it. There were breakup tapes, head banging tapes, depression tapes, and road-trip tapes.

Now, I make playlists on my iPod. Although similar, it is not quite the same. The closest I came was making CDs for a Kiwi friend of mine to introduce him to some of my favorite bands. It wasn’t really a musical love letter. Perhaps it was a musical flirtation.

Were you ever, or are you now a music junkie? Did you make mix-tapes and if you did, do you remember what were on them? Do you have some lying around somewhere collecting dust? Or even now, do you make playlists? If you do, what’s on your favorite? Curious minds want to know.