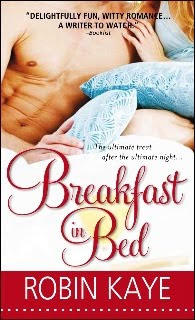 In my next book, Breakfast in Bed, Rich Ronaldi really can’t cook. He’s never been allowed in his mother’s kitchen. He doesn’t know what a pyrex pan is. He’s never been taught how to do dishes. He never set a table. The man is spoiled, sure, but he was also deprived an education in life 101. His mother thinks nothing of it. Rich is the prince, after all. If food isn’t microwavable, Rich is afraid to touch it. When he realizes the only way to be an equal partner in a relationship is to be able to put something more on the table than microwaved coffee, he finds a Domestic God Coach to teach him to cook and clean. I had such fun writing about Rich’s adventures in the kitchen and every other room in the apartment. And believe me, they were adventures!

When I was coming up with the story for Breakfast in Bed, I thought long and hard about people who say they can’t cook. I’ve always been amazed by seemingly intelligent people who say they can’t cook. I mean, really, how hard is it? You open a cookbook, read a recipe, and follow the directions. We’re not talking rocket science. I always thought that those who say they can’t cook simply won’t cook. Not that there’s anything wrong with that. I don’t do yard work. I don’t say I can’t do yard work because if need be, I could start the mower and cut the grass. I just choose not to—vehemently. I understand those people who are passable cooks, they can get by, they haven’t poisoned anyone…lately, but they don’t like to do it. It’s like me and lawn work, I’ll be a terrible landscaper. I have no desire to do it or passion for it. I enjoy a beautiful garden, but not enough to be cutting, clipping, mulching, and pulling weeds myself. No way!

I think people fall into one of two categories. There are those who eat to live and those who live to eat. Those who eat to live usually don’t make great cooks. They lack the passion it takes to put your heart and soul into a dish. They usually look at food as fuel, they’ll go as far as saying there’s good fuel and bad fuel, but they’ll eat pretty much whatever is put in front of them. If forced to fend for themselves, they’ll throw together something that covers the bases and call it good. Then there are the people like me—those who live to eat. The worst part of being a foodie, other than the fact that we’re usually a little plump, is that we tend to be picky about what we eat. We have cravings and if those cravings aren’t satisfied, well, life can get pretty ugly. We’re not the type to open the refrigerator, look inside, and be satisfied eating whatever leftovers lurk within. No, if we feel like eating the leftovers, that’s fine, but if not, frankly, we’d rather starve.

Foodies remember vacations by fabulous meals and restaurants. We mark holidays by what we make for dinner. When we think of menus, we not only consider what dish’s taste will complement the others, but how it will look on the plate. I always make a fresh pork roast with a Grand Marnier cherry sauce for New Year’s Day dinner. It looks beautiful on the plate along with curried rice (a deep, rich, yellow color) and French cut green beans with almond slivers or roasted asparagus. Foodies even dream about food. I’ll never forget the morning I awoke after having dreamt of a wonderful breakfast—odd but wonderful. It was a bed of sweet potato hash browns with onion and curry served with a scoop of black beans cooked with cumin and a hint of cayenne, and topped with a fried egg. It sounds strange, but I’d eaten it in my dream and it was divine! I got up, cooked it and now it’s one of the family’s favorite breakfasts.

Foodies are also pretty persnickety when it comes to dining out. I can’t stand going out to dinner and eating food I know I can cook better. When I dine, I want a feast for the palate, the eye, and the ear. I want soft music, good conversation, beautiful presentation, fabulous taste, and spectacular service.

So where do you fall in the spectrum? Do you eat to live or do you live to eat or some place in between?