Reality TV: How Real Is It?

By Donna Lea Simpson July 18, 2009
If anyone knows me well, they know I dote on Reality TV in a shameful way. I watch American Idol and Dancing with the Stars, Survivor and Amazing Race, of course, but I watch some of the less admirable (read: totally over-the-top guilty pleasure types) too. I've cringed through the hot tub scenes on the Bachelor/Bachelorette, squealed in disgust at the bug-milkshakes on I'm a Celebrity, Get Me Out Of Here, and rolled my eyes until they stuck in my head with Paris Hilton, My New BFF (really, who signs up thinking they're really going to be Paris's new best friend?).
Do I think they're real, though? No way, at least, not in the sense of being real, unscripted, unedited versions of life. Reality TV adheres religiously to the constructs of fictional narrative (there, I almost made it sound respectable, didn't I?).
Fiction is built using six building blocks: Character, Dialogue, Setting, Plot, Point of View and Time Sequence (Beginning, Transitions, End) (ref: Google docs: Fictional Narrative)

How does Reality TV use this?
~::~
Character: Of course they put out casting calls for these shows and invite 'audition tapes', and a lot of the respondents are wannabe actors and actresses. But in my estimation (I don't have any inside knowledge) they are looking for a blend. They want some clearly defined 'types': the beauty, the brain, the stud, the jock, and then some quirky types, like the cranky old dude, the wild child, etc. This year on Big Brother they've gone one step further and labelled them according to recognizable high school cliques: Popular, Athletes, Brainiacs and Offbeat. But I predict (and it's already happening) that the people in those cliques will resist such rigid classification and find their own strata.
Dialogue: Most Reality TV uses a blend of two different types of 'dialogue'. There is the taping of interaction between the participants, and then there is the 'confessional'. And it's in the confessional pieces that the producers and editors get to shape the stories they want to tell, because they do indeed have storylines that they develop. On the Bachelorette this season there has been a lot of controversy about Wes, the wannabe country singer (who doesn't sing or write very well, sadly) and his scandalous treatment of Jillian. He is just using Bachelorette to get publicity for his career (Gasp! As if that isn't one of the only reasons to sign up for 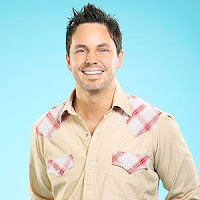 the show) he has a girlfriend (Gasp! As if that hasn't happened before). Of course, he is the requisite villain of the piece, the Snively Whiplash, the Darth Vader. Trouble is, I can see the heavy hands of the writers all over this piece, and Wes doesn't have enough 'menace' to carry off the villain role. Toward the end of his time on Bachelorette I started to feel a little sorry for Wes, because they so clearly were coaching him in his behavior to make him the villain, and instead he just looks hang-dog, to me. Glum, picking his teeth and appearing bored. Even his final bit, where he says he's the first guy in Bachelorette history to make it to the top four with a girlfriend, felt... written. I'm sure the producers told him that he would be a big hit and would get loads of publicity, which he has, and it might even help him if he had any discernable talent.
Setting: Ah, setting! This is where Survivor shines. They pick some beautiful, out-of-the-way spot and film it brilliantly, making the setting almost another character in the storylines.
Plot: Goes without saying. Without manufactured plots Reality TV would just be a rambling series of interactions among some - for the most part - dull people.
Point of View: Big Brother is the best at creating point of view, and using it to create 'surprising' conclusions. They will show confessionals that seem to point in one direction as to who is going to be evicted that week, or who is working together, only to turn around and have something completely different ensue.
Time Sequence: Beginning, Middle, End: All writers are told to remember that their story needs clearly defined scenes to delineate the movement of time and change. Reality TV does this too, or at least the best of them do. They create characters who have a development arc that takes them from naive to knowledgable, uncertain to self-confident, etc. They create 'showmances'... romances made for TV.
~::~
So, if all of this is true, if editors and writers and producers are manipulating the characters to create recognizable story types, what's real about Reality TV? Not a whole lot, but I'm endlessly interested in how they manage to manipulate (mostly) normal folk into 'characters' in their stories. I wonder what these people think when they see the season as we viewers see it. Do they even recognize what they were going through at the time when comparing it to what the producers and editors have made of it? 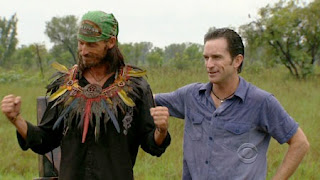 I have one final thought: Ben 'Coach' Wade from Survivor Toncantins. He has to be the most amazing created character they've ever manufactured. Do I think the real Ben Wade is quirky? Probably. Do I think he's the lunatic they created for TV? No way. But it was... interesting!
So... do you watch Reality TV? C'mon, 'fess up.