Taking the Yin with the Yang... 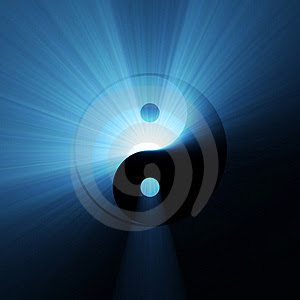 Vacation is over for another year, and I'm back at work this weekend. I was scheduled to be off for another six days after we got home from Myrtle Beach, but on the drive back to Indiana, I started coughing and was sicker than a dog by the time I got home. So, after seven days of fun in the sun (during which the sinus trouble I've had since Easter actually cleared up), I got another week of sniffing, sneezing, stuffy head misery.

Like most things in this life, there's a trade-off. For every up, there is a down, and for every yin, a yang.

Outcast has had it's launch, and I should be getting Fugitive from the copyeditor soon, but now, I'm back to writing the next installment in the series, Hero. I'm trying to learn from the comments of readers and reviewers as I write, and also from those of editors and copyeditors. I hope I'm improving as a writer, but I sometimes worry that if I try to please everyone, I'll end up making no one happy, especially myself. I'm assuming that this is what happens to a writer when a series is reasonably successful: you stop writing them for yourself and start considering the wishes of others. The trouble is, different people like different things. Most of the reviews of Outcast have been favorable, but at least one didn't like the fact that I had switched to the third person POV because (she said) that first person viewpoint was one of the things that made The Cat Star Chronicles unique.

I do enjoy writing in third person because I can explore different points of view in widely divergent locations, but I also miss the intimacy of the heroine's thoughts. It just isn't as personal. I'm still getting the hang of it, and reading other books has helped, but I long for the freedom that I had when I wrote Slave. Jacinth would say--and think!--anything. She had very few limits, and I miss that. Now when I write a direct thought, it's in italics, or designated as a thought in some other way, rather than simply appearing as the narrative portion of the book. Plus, my other heroines aren't as freewheeling as Jacinth. She is, and probably always will be, my favorite, just as Cat will always be my hero. They were the first, and the nearest and dearest to my heart. Perhaps the best thing about the different writing style is that I can bring them back. ;-)