By Mary Margret June 19, 2009
Mary Margret Daughtridge
Tuesday was the SEALed With a Promise booksigning. I thought I'd share some pictures and the excerpt I read. Our talk lately on this blog about secondary characters we love is the reason I chose the excerpt.

Setup:Emmie, the heroine, has issues about accepting help. Unfortunately, she also has one arm in a sling due to a dislocated shoulder.

Emmie let the door to the ladies room swing shut behind her. And realized she’d made a major miscalculation.
“Oh cripes,” she squeezed her eyes shut, hoping the effort would transfer to the relevant sphincter.
“You’re not supposed to take the Lord’s name in vain.” The remark’s tone was more instructive than chiding, and came from one of the large upholstered chairs set in an alcove, out of the way of the lavatories.
“I didn’t.” Emmie looked around, seeking the owner of the voice, and saw the little girl

Vicky, she’d spoken to earlier. “I said ‘cripes’ not Christ.”
“What does cripes mean?”
“I don’t know.”
“Then why did you say it?”
“I said it because I’ve got to pee so bad, and I just realized there’s no way I can pull up this dress.”
The slim column of taffeta fell straight from her hips to the floor. A kick pleat in the back made walking possible, but it wasn’t the sort of dress that could be reached under—not with one hand.
“I see what you mean.” Vicky left her chair and came over to study the problem. “I could help you. I could push it up for you. At school we had a play and Kelly was a beaver, and I had to hold her tail out of the way when she had to go.”
It was the final indignity, the final assault on any notions of independence she might have had. Today she had submitted to: help into and out of her clothes: help to disguise a subversive cake: help to climb to and from automobiles: help to bathe herself and shampoo her hair. Now she was trussed up in a dress that made her helpless even to manage bodily functions.
You’re only help-less if no help is available. Emmie could almost hear Do-Lord’s slow drawl. In spite of the fact that everyone else was sitting down to dinner, Vicky was here, and despite her youth, evidently had more experience managing this kind of problem than Emmie did. Emmie mentally through up her hands. Why not?
“Obviously you have strong qualifications,” she said, surprising herself with how unfazed—even amused by her predicament—she sounded. “How do you suggest we go about it?”
“We probably better get you as close to the toilet as we can before we start. It was pretty hard for Kelly to walk with her panties down and her tail up.”
The picture that made had them both giggling as they as they turned toward the stalls. “Oh, and we probably should use the handicapped toilet,” Vicky added.
“Yeah, that fits.” Emmie laughed.
Vicky colored a little. “I meant because it has more room, not because you’re…”
Emmie was immediately contrite. She needed to remember that despite her air of competence, Vicky was a child. She couldn’t see things from as many perspectives as Emmie could. “I wasn’t laughing because you said the wrong thing. I was thinking: if having to wear this dress when I can’t use both arms isn’t a handicap, I don’t know what is.”
Inevitably, as Pickett’s best friend, Emmie had picked up a good bit of theoretical understanding of children, but she hadn’t spent a lot of time around them—not even when she was a child herself. It was fascinating to watch Vicky’s freckled little face flit from puzzlement to comprehension, and her eyes light up when she saw the double meaning, got the joke and laughed too.
When Vicky had Emmie positioned in front of the toilet, she placed both hands just below the top curve of Emmie’s hips and pushed the stiff fabric up. “Don’t you wish you were a boy sometimes,” she asked as she eased the material over Emmie’s hips, “and yo 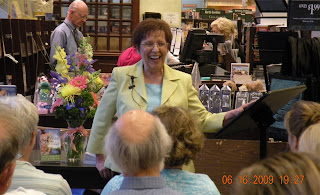 u didn’t have to pull things up and push things down to use the bathroom?”
“If I were a man I wouldn’t be wearing this dress, that’s for sure.”
Vicky settled her hands to push up another section of material. “Even if you’re wearing jeans, it doesn’t help. You still have to get half-undressed, and it’s so embarrassing, if you have to go in the woods or something.” Vicky worked another section of material up. “And you have to be careful or you’ll pee on your shoes.”
Emmie stifled a bubble of laughter at the little girl’s artless prattle. “True. I guess I never thought about how lucky boys are. They can stand up, all they have to do is lower a zipper, and they can see what they’re doing.” The hem of Emmie’s dress was above her knees now, and as soon as the top of the long kick pleat passed her hips, all constriction eased. “I think I can take it from here, Vicky. I can reach, now.”
Vicky examined her handiwork. “Okay. Call me if you need me.” She backed out of the stall and even pulled the door to behind her although, of course, it couldn’t be latched. “I won’t let anybody walk in on you.”
Emmie sat on the toilet for a minute when she was done, conscious of a relief not wholly due to having eased the pressure on her bladder. And it wasn’t only that she, at last, had a few moments alone with her thoughts. It was something else, like a problem or a weight had disappeared, but she couldn’t put her finger on it.
“Now we need to reverse the process,” she told Vicky as she exited the stall, the skirt of the dress still bunched around her waist. She probably could have pushed it down herself, and almost had, until she thought that Vicky might like to see her job to completion. As soon as she said it, she knew she had guessed right. Vicky knelt in front of her, and with her golden freckled face a study in grave concentration, drew the hem back to its proper position.
Vicky smoothed reverent, gold-dotted fingers over the skirt and rose. “I don’t think we wrinkled it much.”
“Thanks.”
“Don’t mention it.”
Emmie went to the lavatory and waved a hand over the sensor to start the water flow. She caught Vicky’s eye in the mirror. Vicky had returned to the large wingback chair where she had been sitting when Emmie came in. Her head leaned against one of the wings as she watched Emmie. “Vicky, everyone else is sitting down to dinner. What were you doing in here when I came in?”
“I got tired of playing with the other kids. All they wanted to do was run back and forth between the kids’ room and the big people’s room.”
It didn’t square with Vicky’s earlier announcement that she liked to be where the action was. Emmie wondered if something had happened to make Vicky want to avoid the other children, but before she could ask, the door sighed open and Grace, her heels tapping lightly on the tile floor, entered. 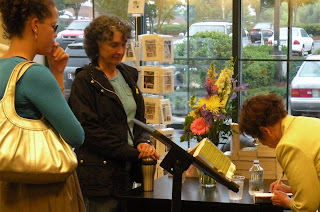 Emmie had never given a great deal of thought to what made a dress look as it did. Now she was struck by how much more mature Grace’s gown looked. Not like an old-lady dress but still, vastly more sophisticated than hers. This evening she was noticing nuances of dress she had formally been blind to—no, not blind to, willfully ignorant about.
“Oh, good,” Grace said when she saw Vicky, “I’ve found both of you. Vicky, your mother is looking for you. Run on now. She was alarmed that you weren’t with the other children.”
Behind Grace’s back Vicky flicked her fingers in a secret wave, as she disappeared out the door.
Grace laid her evening bag on the counter and turned her attention to Emmie. When she whipped tiny boxes, brushes and tubes from her purse, and filled a paper cup with water, saying it wouldn’t take but a minute to fix Emmie up, Emmie didn’t put up one word of protest.

The young lady with the gold purse is a college freshman I've known since she was born. She could have been a model for Vicky. She announed SEALed With a Promise was the perfect antidote to Ayn Rand. So there. If you even meet anyone in the throes of a Rand-overdose, now you know what to give them. (But it's probably worth reading even in less dire circumstances.)

Some readers say they don't like romances with child-characters. Some say they do. What do you say?