Why I Love Writing Science Fiction 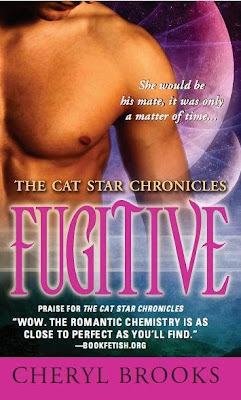 Some of you may have seen this new cover on my blog or Wickedly Romantic, but unless you've looked closely at the sidebar lately, most of you probably haven't seen this one. So, allow me to officially present the cover of Fugitive, book 5 of The Cat Star Chronicles. I absolutely love it!

Perhaps the most fun thing about writing science fiction romance is that the romance can take any form you like. Societies on different worlds can have any kind of taboo or requirement I choose to give them. The entire culture can revolve around the style of dress, or certain patterns of sexual behavior, which is what I did in Slave.

The settings can be anything I like, too. I set Warrior on a planet whose inhabitants colonized it with the intention of returning to an earlier era of non-mechanization in an effort to live more in harmony with nature. The society later reverted to a patriarchal form of feudalism, which allowed me the freedom to write a "historical" adventure in outer space!

In Rogue, I created Darconia, a desert planet populated by dinosaurs who had a different kind of rock to fill most of their technological needs. For the culture, I went matriarchal this time, with males who were considered "too volatile" for most occupations--something which my hero and heroine manage to disprove.

Now, in Outcast, I've got a newly colonized planet that has a climate and terrain similar to Central Africa which gave me the opportunity to have a "pioneer woman" heroine with a "hired hand" hero--which is one of those Wild West scenarios I've always been partial to.

Fugitive is set on a jungle planet with a wildlife painter who finds a Zetithian Tarzan-type living there in hiding from his enemies. This one has given me the opportunity to develop several different forms of wildlife, as well as some natives with interesting talents.

In Hero, you'll travel to a distant space station filled with aliens from all over the galaxy, take a side trip back to Darconia, and then on to several new worlds, hurtling through space on a wild adventure to finally take down the ultimate bad guy.

The settings and the heroines may be different, but thing these stories all have in common are those sexy Zetithian heroes! When you're only dealing with human males, you pretty much already know what most of them are capable of, but with aliens, anything is possible. When I created these guys, I gave them every characteristic I would want my dream alien hero to have--fun personalities, cat-like grace, long, curly hair, and some rather remarkable "equipment"--with the result that I have fallen head over heels for each one of them, and some of my readers have, too!

In Hero, I get the opportunity to explore an aspect of the Zetithian species that I've only hinted at in other books, which is the women. With men who are so incredibly hot, what kind of women would they have? I'm writing my own version, but what about you? Any ideas?