By Judi Fennell April 11, 2009
Romantic Times Magazine contacted me recently about doing a blurb for their Web Forum page (to be in the June issue) about what my favorite websites are, as an author or personally. I had to think about it because I do a lot of cyber-surfing. But one that was incredibly useful for writing In Over Her Head (and the others), is Google Earth. Not a website as much as a web program (and I'm not a tekkie, so please excuse me if I call it by the wrong name), I can get lost in it for hours.

And when I started doing the logistics for In Over Her Head (i.e., where is Reel watching from while Erica's getting forced into the ocean at gunpoint, or where can his lair be after she gets shot, etc.) I did spend hours on it.
There is absolutely NOTHING in the North Atlantic ocean floor between the east coast of New Jersey and Bermuda. Flat seabed. Talk about frustrating because it's too many miles to swim to Bermuda. (Why Bermuda? Ah, well, you'll have to read the story to find out, but Bermuda plays an important role in the story and one of these days I'm going to have to do a research trip there ;} )
I did eventually find a few rises in the ocean floor, closer to New York than southern New Jersey and figured Reel could have a place there. Yes, it's out of the way to Bermuda, but it works.
Then I had to figure out how to get them to Bermuda, again without spending days (and pages) of straight swimming with nothing happening but dialogue, then again from Bermuda to the Caribbean. Google Earth has ways to measure distance directly on the screen. It was also great to be able to see the whole ocean floor, find little rises above the surface of the sea that are too small to be inhabited islands, AND to see the landscape of those cays. I could move them around the ocean in a suspended-disbelief manner.
As I said in another interview, Google Earth exists to make my life easier. 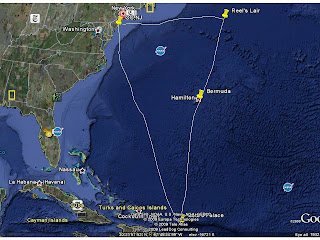