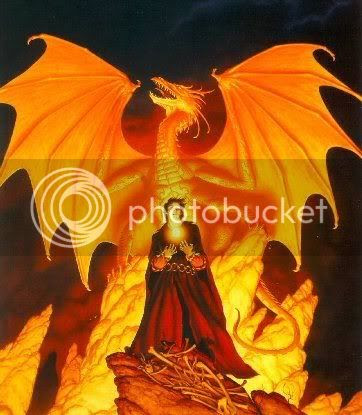 We've all met a few of them along the way: those characters who live on in our thoughts long after the story has ended, prompting us to wonder, however irrationally, what happened to them. As a reader, I've encountered a number, and going back to read their tales is like meeting up with old friends. For instance, I'm re-reading Stephen King's masterpiece The Stand right now, a book I've revisited every couple of years since discovering it in the sixth grade. His particular gift as an author, and one that has always inspired me, is to create characters who leap off the page and truly breathe. I have wondered about the eventual fates of Frannie, Stu Redman, and Tom Cullen for a long time, wishing I could check in on them. There's no way to know, of course. Stephen King himself probably doesn't even know. So I re-read their story and try to content myself with revisiting the places I, and they, have already been. And "Don't Fear the Reaper" is always playing in my head as I do it:-) Um, to appreciate that, you'd have to have seen the mini-series. It's the perfect song for that book, though.

There are other characters I carry with me too, of course. In romance, I've never let go of Lisa Kleypas' lovely and resourceful Wallflowers, or of Nora Roberts' three witches from her Three Sisters Island trilogy. The kingdom of Dream, and Morpheus, from Neil Gaiman's Sandman, recently caught my imagination as nothing had in a long time and have often crept into my thoughts. Never thought I would fall into a graphic novel that way, honestly, but it was utterly captivating. J.K. Rowling's motley cast of characters are ones I know I'll never let go of, no matter how hard it was to accept some of their fates. And the list goes on.

Unforgettable characters are the ultimate gift an author can give a reader. It's not a perfect science (I have, on occasion, loved a character while not caring at all for the story they apppeared in), but as a writer, making my characters live and breathe on the page is a goal pretty high on my list. All of my creations, hero and heroine, villain and supporting character, stay with me and are not forgotten (that would be both rude, since I invented them, and also a pretty lousy recommendation for my own work), but even among them, there have been a few standouts who have not wanted to let me go. The nice thing is that I can write their stories if they nag at me for an extended period of time. And, being that I wrote a trilogy (the final book, Wild Highland Magic, comes out in May...gotta get the plug in there!), I was able to give readers a little more of the story of each character, even the ones living their Happily Ever Afters. And believe me, I probably enjoyed checking in on them more than anyone!

So who would I peg as my own most unforgettable character, one who emerged from my own frantic and jumbled imagination? Well, anyone who is aware of my bad boy fetish won't be at all surprised. Though it's a close contest, I'd have to say that Lucien, the tortured, sharp-tongued dragon prince from Dark Highland Fire has left the most lasting mark on me. True, he was the villain in that book. But I was pleased to see that a lot of readers saw his potential for redemption, and wanted to know what happens next. I'm happy to say they'll find out in the upcoming Wild Highland Magic. Lucien wouldn't let me alone, so he got a very large supporting role in the story of how Rowan's cursed brother gets his life back...finding his own way in the process. But though he may have found his destiny, Lucien Andrakkar is just one of those characters whose story will never quite seem as though it should be finished, who I'll always wonder about. And that's just fine with me:-)

So now it's your turn: who are some of your favorite, most unforgettable characters? Whether you've read them or written them, what characters came to life on the page for you?