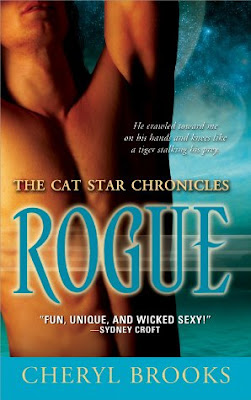 It's no secret now that the March releases have been released in February, and since I received my author's copies at about the same time, many of my friends are now in possession of a signed copy of Rogue. When my friend Natalie got hers, she read through half of it in one night, and last night, another quiet one in the ICU, she finished the other half. She was a big fan of Slave, but had a little trouble getting into Warrior, but this one, she really enjoyed. That's the odd thing about this series, when books are written in first person, either you like that person's voice and personality or you don't. My sisters both preferred Warrior to Slave, while other readers have devoured every installment.

But now that you've been warned--or dared!--here's a little more about the actual story.

Rogue is the tale of two Zetithian brothers, Trag and Tychar, alien warriors who were captured and sold into slavery near the end of the war that resulted in the near extinction of their kind. They have been the pampered pets of a Darconian queen for the past twenty years, and though their lives haven't been hard, being the lone humanoid males on a planet populated by lizards hasn't allowed them much in the way of sexual gratification. However, the progressive Queen Scalia has hired a human female, Kyra Aramis, to give piano lessons to her daughter.

Alone on a world filled with intelligent, but fearsome dinosaurs, Kyra is understandably nervous, and the discovery that she is not the only humanoid on the planet offers only a brief comfort. When Tychar is assigned to be Kyra's personal attendant, and though he and Trag are both irresistible, there are two of them, and worst of all, they are slaves to the Queen. What's a girl to do?

Just when things get interesting, rumors of unrest begin flying, and the peaceful planet of Darconia undergoes a major political upheaval, with the offworlders caught in the middle.

In the previous books in this series, the heroes had both endured a life of harsh slavery. However, in Rogue, I took a different tack, giving them to an owner who not only treated them well, but cherished them for their beauty and individuality. The two brothers are similar in appearance, but Tychar is a charming rogue, brought up on his homeworld of Zetith, while his brother, Trag, is a restless renegade who was raised offworld by his uncle, the captain of a space freighter. I wanted to explore the different personalities in an effort to demonstrate that even though Zetithian males all exude sexuality, there are still differences, and even when two of them are hers for the taking, a girl can still make a choice.

Just as my heroes are different, so is my heroine. In Slave, Jacinth was tough, space savvy, and never at a loss in difficult situations. Warrior's heroine, Tisana, was a powerful witch with a sharp tongue and a dry wit. Kyra, however, is a musician, and her tendency to be a bit timid makes her decision to take up a teaching post on a distant world surprising to her friends and family alike. But like all good heroines, she gets the chance to grow in strength as a person and as a woman in love.

Many of the supporting characters are aliens. Some are from Darconia, while others are slaves from distant worlds, and each of them have their own peculiar characteristics and personalities. There were plenty of opportunities for humor, from the Darconian guard who is smitten with Kyra, to the piano-playing youngest son of the Queen. There are new characters who have some spin-off potential, as well as a surprise visit from some old friends.

This being the third in the series, it also marks the last to be written in first person. The next book, Outcast, which is due out in June, will be the first I have published in third person. I've heard the full gambit of opinions on which POV is best, and though first person has served me well, many readers have been disappointed that they couldn't get into my hero's heads. Well, from now on, they will, and in the meantime, I'm finding it a very fascinating place to be. . . .