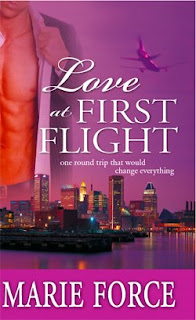 One of the things I wanted to do with Love at First Flight was to give the expected romance formula a gentle shake. In the early chapters, you will see my hero and heroine with *gasp* other people. When I say with, I mean with. Are you with me? Good. ;-)

As I was writing the book, I thought it was important that the two existing relationships end not because Michael and Juliana had met each other, but because they had run their course. That's an important distinction. I don't think I would've liked Michael as much if, after he met Juliana and had an immediate reaction to her, he went to Paige and said, "I can't marry you." It doesn't happen like that at all. In fact, what does happen is so explosive and so devastating to him that Michael is forced to make a very big decision at a very bad time...

Likewise, that which drives a rift between Jeremy and Juliana is not something even I saw coming until it actually happened (one of the very BEST parts of being a pantser). It would've been far too easy for her to discover he'd been cheating on her during their long separation. What does happen might actually make you feel some empathy for Jeremy. He tries to be honest with Juliana, and it blows up in his face. Big time.

So, readers of Love at First Flight are in for something a little different. Expect three romances, a hero and heroine who are heavily involved with other people when they meet, and a new love that grows from a friendship that begins under the most unusual of circumstances. Toss in a murder trial that descends into mayhem, and you'll be taken on a wild flight that culminates in one of the most romantic chapters I've ever written.

Love at First Flight is now available for pre-order at Amazon. Yesterday, I saw an advance review copy, which looks just like the real book. I was skipping all around, so delighted to finally hold in my hands a book I finished nearly three years ago. And I can now attest that it's every bit as exciting the second time around as it was the first.

Let me ask you, what do you think about a romance in which you see your hero and heroine with other people before they get together? Have you ever had to make a choice between the one you've been with forever and the one who makes your heart race? If so, which one did you choose and why?