“We have a few minutes to spare, Aunt Merry,” Mustafa said, halting their slow steps down the apparently never-ending corridor. “Go on and set the path while we wait for Olav.” 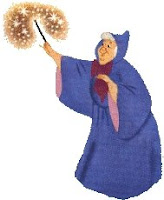 Merry Joyful nodded. She floridly waved her wand at the glowing object that was no longer a cleaning cart. Her wings fluttered and body jauntily bobbed as she urged the sparkling green and orange – carriage? pinnace? – along what was clearly a corridor too wide for the lower levels of an ocean vessel. And, Tricia suddenly realized with a jolt, devoid of doorways or the cheap carpet covering the…..glass? What the heck….?

Marcus chuckled lowly in her ear, bringing her back to, um reality, with a warm rush of desire surging to her toes. “Ah, dear Aunt Merry. Every since she saw Cinderella she had to have a blue ballgown. Said the image suited her.” He chuckled again, pausing for a swift, searing kiss to her cheek. “It is all about the image, you know,” he finished with a smile and penetrating gaze that really did make it hard to think coherently. Especially when he was clutching her so close to his hard body.

“So, um, images huh? Is that why the Lucius Malfoy thing?” She jerked her head toward Jean Pierre, who was leaning languidly against the wall and actually studying his fingernails, if you can believe that! 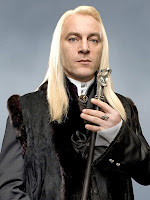 Marcus chuckled yet again – “Damn, I wish he would stop doing that!” she thought as her knees turned to mush and heat coiled in her belly – speaking in an amused tone, “You noticed. He will be pleased. He works hard on the affectation, you see. Joanne was smitten from the start. Suppose that was why she had to write him into the story. Quite smug about it, Jean Pierre is.”

“Jo-Joanne? As in JK Rowling?”

He grinned, melting her further, “Indeed. They have been friends for years. Quite the storyteller, my cousin. More than a few of his tales of home made their way into the books. No Voldemort though,” he added, noting the alarm in her eyes with mirth. “Lord Tybalt is a nasty fellow, but not that bad. The information that the Aldontal brothers sailed the same ship as the arranged Perudinian ‘treaty’ was never taken as a coincidence. We have the upper hand, have no fear of that.”

And oddly, she felt no fear. She felt many other things, vague curiosity and raging lust among them, but no fear. As truly bizarre as it all was it seemed….right. She shook her head, trying to clear it of residual drink-induced haze or hormonal stupor, only to recognize that she had never in her life felt more complete and rational. She had no idea what was going on or where they were going, but it no longer mattered.

“Jean Pierre said you marked me. What did he mean?” 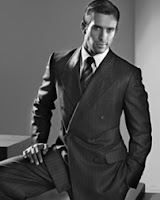 The expression crossing his face was a stunning mixture of wanton passion and fathomless love, his blue eyes electric as they bore into hers. “Ah! You see, where I come from we know our life-mate upon first sight. Admittedly I initially noticed the necklace.” His fingertips traced the string of diamonds, touching and burning skin more than gems, “These are part of the royal House of Black jewels that Armand stole, after all. But as soon as I looked into your eyes, I knew. You are mine and I am yours, even if you do not yet know it for certain. I marked you so none on this ship of devils could harm you.”

Whoa! Too much information! Brain overload! “So,” she stammered, “you are taking me with you to your planet? Beaming me up and all that?” Her attempt to laugh was a bit wobbly; I mean it isn’t every day a girl meets her true love, three navels and all, and gets swept into an interplanetary coup with Vikings and pirates!

Marcus laughed. “Not quite. It is more of an inter-dimensional world. We exist on another plane, outside of your time, beyond the boundaries of the sea; take your pick from whichever sci-fi/fantasy novel you wish.” He shrugged. “Any will explain it well enough. We occasionally visit your world, interfering as little as possible, but the theft of the Dagmorvanian jewels could not be ignored. Tracking Armand and Alistair Aldontal, reclaiming the lost property they sold, has been a lengthy undertaking, leading to this vessel for the final recovery. Finding you was a bonus and has made it worth my while.” 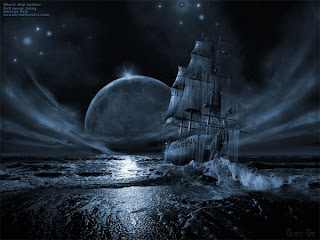 He leaned for a kiss, Tricia feeling faint merely at the idea, only to have the spell harshly broken…

“I am falling asleep here! This is the most boring conversation ever recorded!” Jean Pierre interrupted with a disgusted sigh. “Mustafa, if Olav does not arrive soon we will be forced to leave him. Brother or not, he knows the risks and can take care of himself. Let him and the other soldiers take care of the mess. One security officer is enough to get us safely home, and I am at my wits end with this primitive place!”

“Just a few minutes more,” Mustafa pleaded from his vigil several yards away. “You know how determined Olav has been to permanently end Armand and Alistair trafficking in stolen women. He abhors how it sullies our world and has never been content to merely retrieve the jewels.”

Jean Pierre yawned hugely, the wave of his hand leaving no doubt as to his disinterest in that problem.

Marcus did not seem to be overly concerned either, as he had instantly turned his lips from their intended target – her mouth – to her neck. The havoc he was wrecking made it extremely difficult to for her to remain upright or to pay attention to what was going on around her. Thoughts of lavish staterooms with enormous satin sheeted four-poster beds aboard magical ships sailing through time warps wrapped around her mind. So pellucid was the vision, prompting her to wonder if he was implanting thoughts as easily as he apparently read them, that she almost missed the increasing racket echoing from the dark corridor they had recently escaped down.

Marcus heard it though, tearing his lips away – double damn! – and pivoting with her tightly clutched in his embrace. Even Jean Pierre had reacted, the lazy indifference gone, as they collectively stared at the man running toward them.

Identity confirmed, Tricia thought. But it had not really been necessary as the man was nearly a clone of the trumpet-playing-Turk-turned-alien-ship-security-officer. Yet, that registered barely as the real surprise was the group of men running a dozen yards behind Olav, led by an angry, sword wielding Eric Leif, the Red.