By Michele Ann Young December 15, 2008
God bless the master of this house
The mistress also,
And all the little children
That round the table go.
Old English Christmas rhyme.

Just for fun, I thought I would take you back in time for a glimpse at Christmas in Regency England. These notes are taken from Victorie Count De Soligny LETTERS ON ENGLAND and represent Christmas in London in 1817.

The Count tells us that the arrival of Christmas day is announced by sprigs of evergreens such as laurel, bay, ilex, holly all over the house. Holly is stuck in the windows and over the mantelpieces, and wreaths of them hung against the walls. 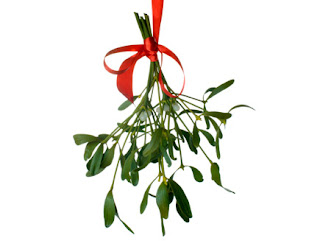 And in the kitchen, or the servants' hall, a large bunch of mistletoe is suspended from the ceiling, underneath which the maidens are liable to be kissed, if they are caught by the male part of the household. (At our house, we hang mistletoe in our hallway, and there is much kissing as people enter the house.)

Parties and visiting occurred among in every class of life. On Christmas day gatherings are chiefly confined to the houses of the heads of families, where all the junior and collateral branches are invited, and, occasionally, a few intimate friends, are called upon to join the party.

Christmas dinner always includes s an enormous piece of roasted beef at the bottom of the table in the first course, an almost equally enormous plum-pudding in the centre in the last course, and a quantity of a certain kind of pastry called mince pies. The latter of these dishes, the mince pies, are never introduced at an English dinner except at this particular period. After dinner the younger members of the family are admitted into the drawing-room. The elder portion of the company converse, or play at cards, or sit still and look on. The youthful play, or sing, or make up a little dance to the piano; and the children join in such games and sports as lead to comic results; such as forfeits, blind-man's buff, hunt the slipper, the game of the goose, snap dragon, or push pin, and dancing,.—making as much noise, and acting and talking as much nonsense, as they please.

The party breaks up at a rather early hour, on account of the children who are present, and who on this occasion are permitted to remain till the rest of the company retire.

There were a great many more traditions at Christmas, but these were the things that stood out for a Frenchman visiting London during the Regency.


I hope you all have a wonderful Christmas, or an enjoyable holiday season, and wish you all the best for the New Year.