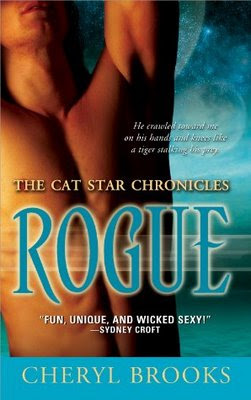 It's been an interesting Christmas season so far. My cards are going out late, people who've gotten presents from me in the past will find their stockings empty, and those gifts that I have bought aren't wrapped yet. Why? Not due to a lack of funds, but because nearly all of my spare time has been swallowed up by this crazy second job I've gotten myself into.

However, in spite of the madness, some really cool things have happened. I received my very first Christmas card from a reader. Not an email, mind you, but a real card! She had won a copy of Warrior in a contest, and then utilized that return address label after I shipped it to her. This is something that I know I'll keep in my memorabilia box for a long, long time. In other news, Rogue has a dynamite new cover, and Lover now has a new title, Outcast, which I like very much. I've also started a new blog, which, though tons of fun, is also very time consuming.

On a slightly bizarre note, Slave has been nominated for a writing award given by the NLA--that's the National Leather Association. Don't guess I need to tell you why they liked it. . . . You just never know what audience you'll reach out and touch in this business.

I turned the copyedits for Outcast in on time, but finishing Fugitive by the end of January seems almost impossible now, but I'll do it. When I finally get going on the big action scene, I know I'll get swallowed up in it and keep going until I'm done.

This time I'm not going to worry so much about how perfect it is, because this will not be my last chance to fix things. There will be changes requested, some minor and some that only seem that way. One tiny little alteration can sometimes cause a ripple effect throughout the entire book. Other changes are more broad, like the personality of a character, but sometimes it just takes deciding which detail is the most important. In Outcast, one of the changes requested was to a scene where the dog gets to eat cake. Well, originally, it was just a regular white cake, but then I introduced a new character who was a baker, and so, the cake was changed to a decadent chocolate. But chocolate isn't good for dogs, so the decision was made to have him eat something else, but it just didn't feel right. The dog wanted to eat cake, for heaven's sake! So, the obvious choice was to take the chocolate out of the cake, rather than the cake out of the dog!

Never let it be said that writers don't pay enough attention to detail. Sometimes we get so bogged down in it that we can't find our way back out.

But enough about that. It's time for some fun!
So, break out the eggnog, the cookies, the rum!
Christmas is coming, it'll be the best yet,
Though often we don't like the presents we get.
But Santa has something all wrapped up in hay
In hopes that you might have some fun where you lay.
It's not in a stocking, it's not in a box,
But it comes guaranteed to knock off your socks!
Now I hear him exclaim as he turns out the light,
Merry Christmas to all, and to all, a good night!