The Benefits of Dreaming Big 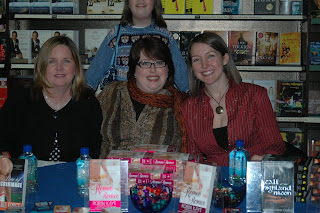 Amazing. Just a couple of years ago, I would never have believed that I'd be in this picture. And yet there I was on Saturday, signing my books alongside the lovely Marie Force and Robin Kaye at the B&N in Baltimore's inner harbor (and by the way, Robin and Marie, you guys are SO much fun, and I'm so glad I got to hang out with you!). It was a little slow, since it was windy and freezing outside (and eventually, snowing), but I don't think I could ever be bored in company like that. If ever there were two women born to write witty contemporary romance, it's Marie and Robin. The laughter kept me warm. Which is good, since we were seated very near the front doors. That's me on the right, with the big smile and the frozen cleavage, shortly before I mooched Robin's scarf.

Casa Babes rock even more in person. DC is going to be a blast this year!

But anyway, as I sat there on Saturday, sampling our buffet of Hershey's kisses and dishing about everything from writer's block to the horrors of pubescent girls to hot Kiwis, I looked around at the shelves and stacks of books, and the beautiful pile of books in front of me. And I realized that this was a big event for me in a lot of ways. It was my very first booksigning, which was huge, of course. But it also marked what a very long way I've come. Today, I'm a published author. But it all started when I was just a sickly little girl, laid up in bed with her nose stuck in a book.

Everyone's romance with Romance started somewhere. With me, it was early, and no wonder. As a child, I was pretty well stuck with living in my imagination. I was a severe asthmatic even as a toddler, often dependent on medicine to breathe normally all the way through high school. Add to that substantial environmental allergies, life-threatening food allergies (nuts), and the simple fact that we lived in Northern New York (otherwise known as the mold and pollen capitol of the universe), and my health as a child was at best precarious, at worst frightening. In kindergarten, a lung nearly collapsed from pneumonia. I was on a first name basis with all of the nurses on the children's floor at the hospital. I'm still amazed that my parents (my mom, thankfully, also a nurse) had two more kids after me. Because I was, in a word, a mess.

But I dreamed big. I could only run in my imagination, but I was reading at a fourth grade level by the time I was four years old. In retrospect, it seems only fair that God gave me something I could do in my massive amounts of spare time. I actually remember the moment of discovery, when I was three, that I could read...and I do mean "discovery," because I never had to try. It was more just realizing the ability was there. Strange but true. Anyway, I remember picking up a book of Disney stories (which I, as a major packrat, still have), opening it to a random page, and realizing that the markings on the page all made sense. It was a story! And I could read it! It was as though a thousand doors were flung wide all at once, and the burst of wonder and joy I felt in that instant has resonated through my life to this day. I might not have been able to play in the snow or jump in piles of crisp Fall leaves without winding up gasping for air, but from then on, I had a way to have adventures that were even better. Is it any wonder I gravitated to fantasy and tales of the supernatural? If my mind was going to escape the confines of the house for a while, I loved it best when it was a grand and fantastic journey. Still do, in fact.

And so it went, until eventually, inevitably, I found Romance. My mom, a certified Romance junkie, had gone out and splurged on A Knight in Shining Armor by Judith McNaught, newly released in hardcover. I was a sixth grader, already a precocious reader and completely intrigued by the premise of the new book in the house. A modern-day heroine and a medieval knight? Time travel? Happily ever after? I had to read it. My mom, bless her, was happy to share. And that was it for me. Once you get to fill in the blanks of all your childhood fairy tales, I don't think you ever really look back. And even then, I remember thinking, "Maybe I could write a book like this someday."

That's where my writing comes from. Those little girls, the pale kid with an inhaler in one hand and Grimm's Fairy Tales in the other, and the shy, dorky pre-teen with a poodle perm and a copy of Julie Garwood's latest historical, have kept me writing from the heart...and they got me all the way to that booksigning on Saturday, healthy, less dorky (on the outside, at least), and surrounded by new journeys I had put to paper all on my own. It's been a long road, for sure, with hopefully a long way to go yet, but I can't help but think that given her druthers, the little girl I was would have been thrilled to end up right where I am.

Sometimes, it just hits you. And it's amazing.

Now it's your turn, readers and writers: when did the romance with Romance begin for you? have a wonderful week!