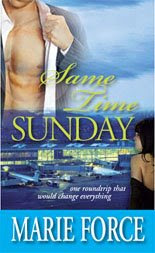 By: Marie Force
I'm being asked "what's next?" a lot now that "Line of Scrimmage" has been out for more than a month. It reminds me of when I got married and people started asking when we planned to have kids. Then we had our daughter and they asked if we'd be having another one. Once we had a daughter and a son, a few asked if we were going for number three, but that tapered off once they took a good look at the glazed look in our eyes from a baby who didn't sleep for the first 18 months of his life. Now that my first published "baby" is out in stores, the question becomes what's next?

I'm very excited about my second book, "Same Time Sunday," which is based on a conversation I overheard in an airport ten years ago. A young man and woman waiting with me for a delayed flight were talking about the difficulties of their long-distance relationships and both were worried about the weekend ahead. They discovered they were on the same flight home on Sunday night, and I imagined them falling in love with each other. I carried the idea around for about seven years before I finally wrote it, and three years after I finished the book it will be published! Set in Baltimore, MD, Jacksonville, FL, and Newport, RI, "Same Time Sunday" encompasses three of the four places I've lived in my life (the other is Rota, Spain), and I was thrilled to be able to tap into the locations and experiences I encountered during my ten years as a Navy wife.

This book offers a little bit of everything: a sizzling romance, a contentious murder trial, and a love "square" as opposed to the more common triangle. My hero and heroine, Michael and Juliana, are involved with other people when we first meet them, which is not something I've often seen in the romance genre. As their relationship progresses from friendship to love, they're grappling with the demise of long-term relationships with other people. I was intrigued by the notion of the right one coming along at the worst possible time. This book breaks the mold in a number of ways, and I love the way it ends. I hope you will, too. Watch for it in the spring!

What do you think of books that step outside the romance formula? How do you feel about seeing your hero and heroine with other people before they come together as a couple? And do you participate in the sport of eavesdropping? :-)