A Few Minutes with a Mare and a Witch 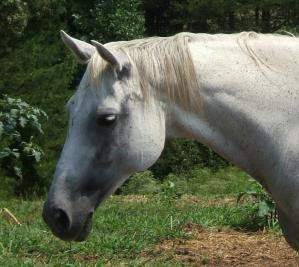 Hello again! This is Marla Elkhorn reporting from somewhere between Earth and—what did you say that planet was called?

Marla: Yes, that's it. Anyway, as promised, today I'm interviewing Tisana, a witch from the planet Utopia and her horse, Morgana who are characters in the upcoming romance novel, The Cat Star Chronicles: Warrior, which is due out October 1st. So, Tisana, tell me what your life was like on Utopia.

Tisana: As you said before, I'm a witch, but primarily I'm a healer, specializing in herbal medicine.

Marla: How fascinating! And where did you learn this?

Tisana: From my mother, mostly. We witches pass on our knowledge from mother to daughter.

Marla: What if there aren't any daughters?

Tisana: (laughing) Wouldn't happen! We witches only have one child who is always female!

Marla: Is that right? Amazing!

Tisana: Yes, and though we may take any lover we choose, the choice of the father is with the gods. Only the right one can impregnate one of us.

Marla: so you wait for the one?

Tisana: That is correct.

Marla: Found him yet?

Tisana: Careful what you ask her, she's feeling a bit mareish right now. . .

Tisana: Not met many mares, have you?'

Tisana: Mares don't think much of men unless they're in season, and, um, she's not in season right now--can't you tell?

Morgana: No, but you always are, it seems!

Tisana: (in an aside to Marla) See what I mean? Very testy! If it had been up to her, I'd have left my dear Leo in a snowdrift!

Marla: In a snowdrift? How did that happen?

Morgana: Foolish male! Tried to escape in the middle of a snowstorm! They're all idiots!

Tisana: (patiently) Now, you know that isn't true, Morgana! You didn't think Sinjar was such a bad guy when you were in the mood.

Tisana: He's a stallion—a total stud!—and one of the the funniest guys you'll ever meet!

Tisana: Oh, he is, trust me. . . Morgana! Will you please stop snorting like that!

Marla: Better leave that alone I think . . . don't want to get kicked . . . So, Tisana, tell me more about Leo. We interviewed him and Gerald a while back, and we heard some very, um, interesting things about him, but we'd like to hear it from your perspective.

Tisana: (smiling) Well, you've met him, so you already know how handsome he is, but he's such a sweetie—playful, sexy, mysterious, one helluva fighter—you should see him on a horse with a sword—absolutely breathtaking!!! And then there are the multiple, effortless, overwhelming orgasms. . . .

Marla: (clearing her throat with an effort) Yes. I-I've heard you only have to taste him to do that.

Marla: (choking just a bit before changing the subject) So, I hear you can communicate with animals?

Tisana: Yes, we had a rather large menagerie to help out on our adventure. In addition to Gerald, the squirrel, we had a dog, horses, vultures, and an otterell.

Tisana: Yes, they look like reptilian owls, but they speak in riddles. It nearly drives me crazy to talk with one of them, but I'm improving. My powers seem to have increased since I found “the one.” It's been an interesting side effect. Made it much easier to keep the dog from killing Gerald, by the way.

Marla: You were on a rescue mission, right?

Tisana: Yes. Leo and I had to find Rafe's sons.

Morgana: One of her former lovers, and a real horse's a—

Tisana: No one asked you, Morgana!—though you do happen to be right about that. . . .

Marla: (changing the subject again) And Leo told us you can set things on fire just by looking at them. Could you tell us more about that?

Tisana: That's another thing I seem to have gotten better at, thanks to Leo. I used to just start fires and ripen fruit, but now I can actually shoot fireballs. It's pretty cool, really.

Tisana: What? Don't want to watch me ripen a banana?

Marla: No, I mean the fire thing.

Tisana: (nodding) A little scary, isn't it? That's one reason why I don't broadcast that ability—probably shouldn't be telling you, actually.

Marla: (cringing) This isn't one of those things that now that you've told me, you have to kill me—is it?

Tisana: (patting Marla's hand) No, not really. Just don't tell anyone else.

Marla: I . . . think it's a little late for that—this interview is being posted live.

Marla: Well, then, perhaps we'd better stop now before we let anymore cats out of the bag! (looking very relieved) So, there you have it, romance lovers! Join me in looking forward to reading more about this exciting romantic adventure in October! Hopefully, I'll have recovered by then. By the way, Tisana, is that “I will give you joy unlike any you have ever known,” thing just a line of Leo's or is it—

Tisana: (firmly) Absolutely and unequivocally true! Every last word of it!

If the Wi-Fi at the dock works, I'll be able to reply to comments today, but, if not, we'll talk more when I get home on Friday. Have a great day!