The Cat Star Chronicles: Warror, A candid interview with Leo and Gerald 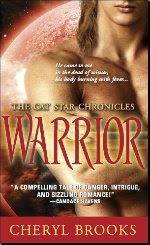 Hello, there! This is Marla Elkhorn, and I'm here today to interview Leo and Gerald, two characters in the upcoming sci-fi romance novel, The Cat Star Chronicles: Warrior, by Cheryl Brooks.


Marla: Nice of you both to come such a long way on such short notice! So, Leo, you're the one the title refers to, right?
Leo: Yes, I believe so.
Gerald: No, he isn't! It's me! I'm the great warrior!
Marla: Um, Gerald, not meaning to offend you in any way, but, aren't you a squirrel?
Gerald: Too right! And let me tell you, when there are battles to be fought and won, you need a squirrel on your side!
Marla: Uh . . . huh. I see. . . Well, Leo, you're a—a what?
Leo: Zetithian.
Marla: Well, I guess that explains the cat eyes, fangs, and the pointed ears—love the long hair, by the way! You were once a slave to Tisana's former lover, Rafe, is that right?
Leo: Yes, but very briefly.
Marla: So, you were a slave, but you became a warrior? Would you tell us about that?
Leo: I was a trained fighter long before I became a slave. Those skills were put to use when Rafe's children were kidnapped and Tisana and I had to track them down.
Gerald: I helped, too! It was snowing like crazy and there were bad guys, purple vultures, dogs, and horses—
Marla: Um, yes, thank you, Gerald! Leo, I hear you're an expert with a sword. You learned this on Zetith?
Leo: Yes.
Marla: Don't say much, do you?
Gerald: Aw, he's just being stubborn. He didn't want to do an interview with me—doesn't like me much. Says I'm hateful.
Marla: Are you?
Gerald: No, I'm not! I only throw nuts at Tisana for fun!
Marla: (placatingly) And I'm sure she enjoys it, too! Leo, would you tell me a little bit about Tisana?
Leo: (his eyes beginning to glow) She is the heroine in the story—a beautiful, powerful sorceress.
Marla: And what are her powers?
Leo: She is able to start fires with a glance of her lovely green eyes and can communicate telepathically with animals. She is also a highly skilled herbalist.
Marla: That's nice, but is she a good witch, or a bad witch?
Leo: (laughing) Oh, she is good—she is very, very good!
Marla: Why do I get the impression that you're not talking about her magical abilities?
Leo: (smiles, revealing his fangs) Oh, but I am! She is very . . . bewitching.
Gerald: Cchhrrgghh!
Marla: What was that?
Gerald: Those two! Mating all the time! Didn't matter where they were or what was going on. . . . Do you know that once she even—
Leo: (firmly) Gerald, we said we would not discuss personal matters in this interview!
Gerald: Well, you started it! “I will give you joy unlike any you have ever known.” Ha! What a line!
Leo: It is not a line! It is simply the truth!
Marla: (mutters) I think I've lost control here. So, Leo, tell me about your home planet, Zetith.
Leo: It was destroyed.
Marla: And why was that? Was it an accident?
Leo: It was an act of war on my people.
Marla: Folks must really hate you guys.
Gerald: Uh, that's not the real reason. . . .
Marla: Perhaps you could explain?
Gerald: It pains me to admit it, but these guys have got something no other male has.
Marla: And that would be . . . ?
Gerald: (grudgingly) Well . . . to have an orgasm, a woman only has to taste them.
Marla: (Fanning herself) Taste them?
Gerald: Uh-huh. Taste them—though that fluid they produce seems to work in other places, too—if you know what I mean.
Marla: (faintly) W-which part do you have to taste?
Gerald: (snickering) Which part do you think?
Marla: (gasping) Leo? Is that right?
Leo: (his lips curling into a smile) Yes, it is.
Gerald: And it's quite a part, if I say so myself.
Leo: (growling) Gerald!
Gerald: Ooo, and he can purr, too! Sounds very soothing—even to a squirrel.
Marla: (looking like she's about to cry) You can purr?
Leo: (nodding) Would you like me to demonstrate?
Marla: I'm not sure I can take that right now, but I think I understand why your planet was destroyed! Are there any more of you left?
Leo: Ah, that would be telling!
Marla: Well, there you have it, folks! Better stop now before we give away too much of the story! I can hardly wait until it comes out October 1st to read more! Next time, look for another interview with Tisana and her horse, Morgana!