By Terry Spear/Terry Lee Wilde July 31, 2008
Since so many are goofing off at RWA...fun!!! And I'm not...lol, I thought I'd post something not writing related.

Besides writing, what kind of hobbies do we have?

For me, I make award-winning teddy bears that have been featured in magazines including Texas Monthly, Texas Co-Op Monthly, The MacNeill Galley, Teddy Bear & Friends, Teddy Bear Review and numerous newspapers. The bears have sold all across the states, Canada, Russia, China, Switzerland, and as far away as Australia! http://terryspear.tripod.com/celticbears/ 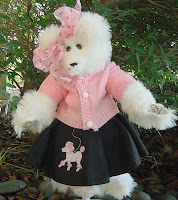 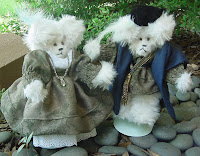 Like creating stories, each bear is unique, having its own personality. And when someone buys it, it's the bear's face that draws them in. :) these were 16th Century German dressed bears created for an author's new book release.

I make everything from Celtic Clan Bears, vampire bears and wizards to birth bears with names and birth dates embroidered on the paws. But one bear I've had some queries for lately--a werewolf bear--still hasn't come to fruition. LOL

Here's Patriotic Patrick, featured in Teddy Bear Review, and one found a home in Russia!

Do you have a special hobby?

Terry Spear
www.terryspear.com
Heart of the Wolf, The Vampire...In My Dreams (coming August 26)