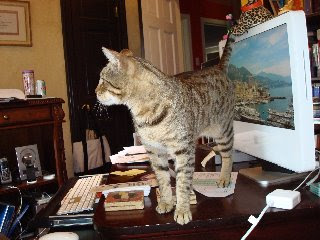 The other day my three-legged Bengal cat Raja decided my desk was the purr-fect place to spend the afternoon, despite the clutter. While removing the cup of coffee, the previous night’s water, the laptop he thought was in his way, and the flotsam and jetsam that accumulates on the desk of a messy yet creative person, I thought about how much our pets add to our lives and the lives of our characters.

Years ago, I had a dog named Clancy. She was a hundred fifty pound Black Lab/St. Bernard mix with a St. Bernard head and a Black Lab coat.

Clancy was my baby before I had children, and when we did have kids, she was convinced they were her puppies. Every night she would check on each of the children, and sleep outside their bedrooms doors to make sure they stayed where they belonged.

When my youngest was a baby and very ill, my four-year-old would beg to go across the street and play at the neighborhood park. I allowed him to go as long as Clancy was with him. Now, don’t get me wrong, I watched the two of them from my front room. I’d get them across the street, and even though I was there, Clancy would hold my son’s hand in her mouth while they walked across. She’d take him to the play equipment and was never more than a foot away from him. If he went up on the slide, so did Clancy. She really hated going across the chain bridge, but if he did, she followed. If anyone else came to the park, Clancy would take his hand and bring him home--much to my son’s dismay. 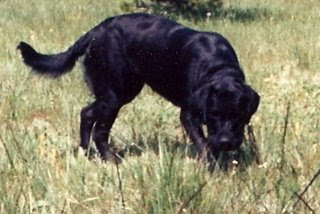 Clancy is in every book I’ve ever written, in one form or another. In Romeo, Romeo and If You Can’t Stand The Heat… she is Dave. The only difference between the real Clancy and the fictional Dave is that Dave is a boy.

In Romeo, Romeo Dave is an integral character. He serves as the gatekeeper in his mistress’s life. He’s ultra-protective, loyal, and when someone he doesn’t like stops over, he does a very realistic impression of Cujo. An effective chaperone, Dave herded Nick to the couch the first night he stayed over at Rosalie’s apartment.

Dave isn’t perfect. He has a penchant for carrying around a piece of clothing belonging to someone he likes. Unfortunately, it’s usually their underwear. He has the tendency to forget his size and step on sensitive body parts, which makes him a good form of birth control. He’s under the mistaken impression that your bed is his bed, that front seats of cars were made for him, and that running is something you only do when food is involved. 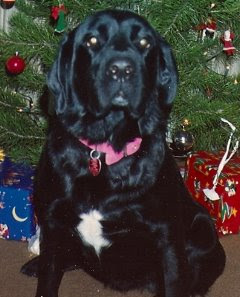 Through it all, Dave and all animals remind us of our humanity. He serves as a surrogate child, a shoulder to cry on, and a steadfast friend. He has the power to make you laugh out loud, and even shed a tear or two. I for one can’t imagine my life, or my characters’ lives, without pets.

I wonder if all Raja’s pussy footing around my desk might be a symptom of jealousy. It’s probably Raja’s way of demanding his own book. Like most Bengal’s, Raja usually gets what he wants, so don’t be surprised if you see Raja in one of my future books. He truly is a real character.

Tell me about your favorite animal character…real or fictional.