Launch Party and Giveaway for DYLAN by C.H. Admirand 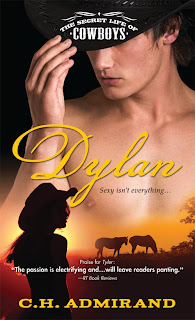 Welcome back to Pleasure, Texas! So much has happened since you were last here and were introduced to Garahan brothers and the Circle G. Emily and Tyler are doing just fine thank you, and loving every minute they get to spend together. Their love is like a shining beacon that Tyler’s brothers envy at first, but then come to understand as they meet someone uniquely special in their own lives.

Dylan is the middle brother—the quiet one (my mom always told me to watch out for the quiet ones. I did and when Dave walked into my life, I knew I’d have to marry that man.) Dylan’s last night working at the Lucky Star has him prepped to lasso the birthday girl. Jolene promises that he’ll recognize her the moment he sees her. Sure enough, a blonde, a brunette, and a redhead walk into the bar—but there’s just something different about the brunette—could be the blindfold.

Instead of me telling you what happens, why don’t you read an excerpt from their first meeting?

Dylan Garahan narrowed his gaze trying to focus in the glare of the spotlight, searching the crowd for her face. It was time for the big move in his act…the show-stopper. Where was she?

Jolene would kill him if he messed this up, but he'd made it through the last two nights and would make it through tonight. The redheaded owner of the club should have no complaints about the middle Garahan brother not keeping his word or holding up his end of the bargain. Damn the woman and her tests!

Controlling the urge to turn on his heel and walk off the stage, he dug deep and found the grit to stick it out. Hell, if Tyler could handle this job, so could he. Garahans went down fighting!
Oblivious to the adoring gazes of the women around him, he moved toward center stage, bent, and picked up the coiled rope. He looked up as a blonde, a brunette, and a redhead walked into the bar…right on schedule…but there was something different about the brunette. Maybe it was the blindfold. He struggled not to laugh, but he couldn't keep from smiling, wondering why the cloak-and-dagger bit.

Looping the lasso in his hands, he started the slow circular motion. Getting the rhythm going until it was smooth and sweet, he raised it above his head and locked gazes with the blonde. When she nodded, he let the lasso fly, as the blonde whipped the blindfold off the brunette.

The woman's stunned expression as the rope slipped around her upper body didn't stop him from tugging on the rope and reeling her in. The patrons of the Lucky Star hooted and hollered, encouraging him to pull faster, but he didn't want the little lady to trip and fall on her pretty face.

Glad that the focus of the crowd wasn't totally on him, he gently pulled her toward him. The brunette's gypsy-dark skin, full red lips, and almond-shaped eyes captivated him. The promise of pain-filled death in her dark green eyes, as she struggled against the bonds that held her, had his lips twitching, fighting not to smile.

She dug in her heels, but he used his strength to subdue her. Undeterred, he yanked on the rope. When her eyes widened in shock, he used her surprise to his advantage and reeled her in the last few feet. When they were a few inches apart, he tipped his hat, smiled, and rumbled, "Happy birthday, darlin'."

Her eyes narrowed, and her nostrils flared; Dylan recognized the signs of a fractious filly about to raise a ruckus. Not a problem, he was ready. Wrapping his free hand around her, he hauled her in close, pinning her to him before she could let loose and kick him.

The crowd roared its approval.

"Let me go," she demanded, her sweet breath tickling the hollow of his throat.

Enjoying himself for the first time since he'd hit the stage, he chuckled and bent his head closer to her full red lips. "Why?" His gaze locked with hers. "So you can have more room to do more damage?"

Her vehement protest didn't deter him; he had a job to do and an act to finish. "Well now, darlin'," he drawled, "that's not what your friends said."

Her eyes sparkled with temper, and her willowy body trembled with anger. Dylan's body stood up and said hell yeah! It'd been a long time since he'd had a woman tempt him. The sultry brunette in his arms looked like she wanted to tear a few strips off of his hide...right before she killed him.

Damn, but that turned him on.

Perverse. That's what his grandpa would say. He grinned and would swear he heard her grinding her teeth in frustration.

"Let me go." She struggled against him, but he'd trapped her slender curves against him so not a breath of air was between them. "I'm not one of those desperately lonely women, or buckle bunnies coming in here looking for some eye candy."

Lord, he really loved the husky sound of her voice. Even angry, it sounded sexy. He fought against the instant attraction he'd felt and shrugged. "I'm not the one whose friends blindfolded me."

She closed her eyes and stopped struggling. Dylan could feel the anger leaving her by degrees.

"They're just trying to help."

"With a face like an angel and a body made for lovin', why would you need any?"

Tears gathered in her eyes. "None of your business."

Well, hell. His one weakness cut him off at the knees. A woman's tears. "I'm about to make it my business."

The music ended and house lights went on, his cue to release his captive and take a bow. Cursing his job and his redheaded boss, he brushed her tears away. Moved by the split second of vulnerability, before she covered it with the toss of her long, dark, wavy mane, he hungered for a long, slow tasting kiss.

He wasn't sure if he wanted to reassure her that whoever had put the sadness in her eyes wasn't worth her time, and that he would be, or if he had been too long without a woman and was letting certain parts of his anatomy take his mind hostage.

Dylan slid his hands around to the small of her back and watched her eyes turn an even deeper green, the color of the tumbled sea glass he'd found as a kid, on a beach down on the Gulf Coast. When the go-to-hell expression on her face morphed into shocked surprise, he dipped his head low so their mouths were lined up.

He could feel her heart begin to pound, but from the dazed expression in her eyes it wasn't from fear; it was something darker and a hell of a lot more fun. He brushed his lips across hers and felt the bottom drop out of his stomach. She tasted like sin, and he was ready to burn.

Need tied his guts into knots, but he'd be damned if he'd be letting go of this little filly before he'd taken his fill. He gentled her with soft, tentative kisses until she relaxed in his arms. When she moaned low in her throat, the knots inside him pulled tighter a heartbeat before she melted in his arms.

Her eyes met his, and he knew she was going to kiss him back. He didn't ask; he simply plundered. Surrounded by the dark, sensuous taste of her, he couldn't get enough. Splaying his hands to the small of her back, he molded her to him, drinking from her lips like a dying man, three days without water.

Hungry for more, he slid the tip of his tongue along the seam of her lips, coaxing her to let him fully taste her dark, sweet flavor. When she parted her lips, he devoured her. Two years of frustrated need, anger, and desire swirled inside of him and struggled to let loose.

He snapped to attention and loosened his hold, though it nearly tore him apart. He was not done. He wanted more, ached for more, needed more from this woman. 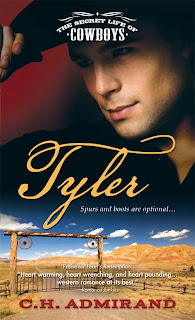 Need to catch up and read the first book in the series? Not a problem because Sourcebooks has a super special program going on right now! It All Started When—offering TYLER and other wonderful titles by my Sourcebooks Sisters for just $1.99!

So now that we are gearing up for the New Year, why not bring home a cowboy to cuddle up with on these cold wintry nights. January won’t seem so bleak with a tall, dark, and studly cowboy keeping you company. If you’re lucky he might just park his boots under your bed.
To read more, visit me at www.chadmirand.com , www.facebook.com/CHAdmirand , or www.twitter.com/CHAdmirand .

Because I was on a double-deadline in December, I didn’t have time to give my webmaster the virtual tour for DYLAN yet…here’s the info:

Don't forget that I’m giving away a signed copy of DYLAN to one lucky winner who comments on this post. Be sure to leave me your email so I can get in touch with you.