Celebrating ONE BITE PER NIGHT! + Giveaway!

By Brooklyn Ann August 18, 2014
After what has felt like an eternity, the second book in my "Scandals With Bite" series is finally here! I celebrated on Saturday with a signing at my local bookstore.

I also raffled off baskets full of goodies and books donated by my awesome fellow Casablanca authors. Again, huge thanks to you all!

And I took pictures with some readers! 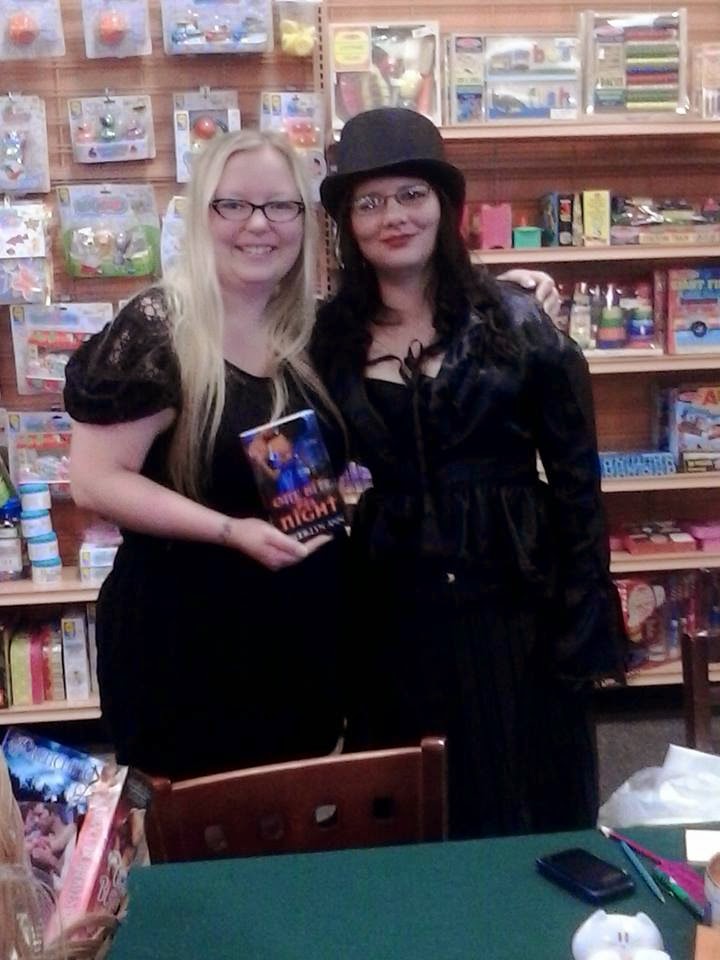 And speaking of readers, so far the reception has been very good.

This one from "Lover of Romance" still has me grinning.

"The story starts with humor and witty come backs, and the you fall in love with the characters immediately. Vincent is a awesome hero....I could just kiss him all over I adored him so much. He is honorable, does have some issues thinking he is evil and all that, but he cares about others, and he is so sweet and protective with Lydia, you can't help but be charmed by his manner. Lydia is strong and courageous, and doesn't mind chasing the man she wants, even if that man tries to run at times from her. Lydia is strong willed and passionate about everything in her life, and will only settle for true love. I felt like I could relate to her in so many ways, and when a heroine is written well in the story it just adds a extra deep layer to that dessert. I truly loved the other characters as well, and it made me want to buy the first book because I truly admired this author's storytelling abilities and to draw you into a story like a bee to honey, and will captivate your attention until the very last page"

Could no one keep track of his recalcitrant ward? Vincent sighed and closed his eyes, opening the Mark between them. Immediately the connection he had forged with his blood sang in his marrow. Just as potent as her gardenia scent, he felt her presence, sweet and delectable. She was in the south wing… in his bedchamber. He shook his head and headed in that direction. Hadn’t Aubert told her to stay away from that part of the castle?
Once he reached his room, he stood in the doorway watching her; curious what she was doing in his room. Candlelight gleamed on her hair. Her hands were folded demurely behind her back as she walked slowly through his room, peering at the furnishing and tapestries with avid interest. When Lydia reached the large bed built to accommodate his height, she paused and reached out a tentative hand to touch the coverlet.
The innocent gesture made his blood boil with lust. Curious about my bed, are you? I don’t sleep in that one, though I could show you— He broke off the dangerous thought, holding his breath as she passed the bed, still looking around.
He smiled at the sight of her futile tiptoeing. What was she so curious about? There was nothing in here except—
Lydia paused at a wall sconce, reached up toward it…
“Damn it,” he growled, crossing the distance between them and snatching back her hand.
Lydia gasped and looked up at him, eyes wide with abashment and alarm. “My lord! I was ah…”
Before she could stammer an excuse, Vincent grasped both her wrists and captured her gaze. She seemed to forget what she was saying. Repugnance tormented him at the act; with her it felt like a violation. Alas, it was necessary. She had almost found the entrance to his lair. She couldn’t discover what he was. As she stood mute and mesmerized, Vincent was suddenly aware of the pulsing vein in her throat that sang to him.
Just a taste…his inner demon whispered. Slowly, he slid his hands up her arms, grazing his fingertips across her collarbone before bending down to inhale the sweet bouquet of her blood and humanity. His lips lightly caressed her neck, as lust and hunger warred within.
He wanted more.

And now for the giveaway. What is something "forbidden" that you can't stay away from? Comment for a chance to win a copy of ONE BITE PER NIGHT! 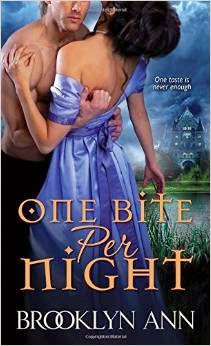