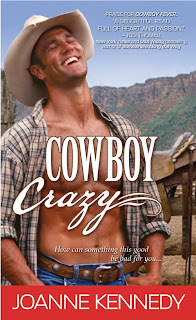 ings, for me, mean new cowboys. And in June 2012, I'm introducing readers to my hottest hero ever in "Cowboy Crazy."

If you have any doubts about that, take a look at this cover.
Sourcebooks has given me some great cowboy covers, but this is the best ever. Who can resist a battered hat, workingman's abs, and a sense of humor?
Not me--and not my heroine, Sarah Landon. Sarah's a country girl who's determined to go cosomopolitan. She's sworn off cowboys for life, but when her boss introduces her to his brother--the family renegade--that resolution, along with her hard-won professionalism, is tested to its limits.
Here's their first meeting:

Lane Carrigan filled the doorway, standing with his legs slightly apart and his arms folded over his chest. He was taller than his brother by a couple of inches, but what caught Sarah's attention was the uncanny vibrance of his blue eyes. Eric had those same eyes, but in his aristocratic face they were merely interesting. Contrasted with Lane's deep tan, they were striking. And they seemed to see right through her skin and into her soul--or maybe just into her underwear. Certainly the spasm of heat the bolted through her made her feel naked.

She wondered how old he was. Eric was the little brother, so that made Lane what? Twenty-nine? But he looked older. Eric's face was genteel and perfectly proportioned; Lane's was craggier, with a nose that was just a little too big and brows that jutted over those blue, blue eyes. It was like you'd taken the same man and let one live a refined, easy life while you put the other one through the wringer. She wondered if it was just outdoor life that made Lane look so much older, or if the lines on his face had been written there by some kind of stress or even sadness.

He lowered himself into the chair beside her, shoving it backward so he could stretch out his legs. His cowboy boots weren't the tooled, polished fashion statements the wanna-bes wore to happy hour. They were plain brown leather, rough, scuffed and unadorned. Workingman's boots.

But he didn't work, she reminded herself. He played, riding real-life rocking horses like a three-year-old on steroids.

She worked her way up the faded denim of his jeans, flicking her gaze up to his face when she caught herself eyeing his belt buckle. His answering gaze slid down the lapels of her jacket and dove into the modest neckline of her camisole. From there, it drifted from side to side, making her renegade nipples perk up and stand at painful attention.

She looked out the window, searching for something, anything that would distract her. There was a cloud shaped like a duck drifting in the wide blue sky.

Lane Carrigan is all cowboy, while his brother is a tall, dark and handsome oil company CEO. How do you like your men: rough or polished?