By Marie Harte August 08, 2019
Today I changed out the water filter in my fridge. Not a hard thing to do, but back when I was married, I'd have asked my (ex) husband to do it. Fixing things I considered his part of the relationship, and he was happy to do so.

Fast forward many years, and I'm happily single and happily independent. I have fixed my garbage disposal, small odds and ends, and today I changed out my water filter in the refrigerator despite having tried before and failed. I'd even ordered the parts myself for the more than 10-year-old appliance.

Big deal, you might be thinking. But to me it's not. Granted, it wasn't at all difficult to fix the fridge, but I had to find the model number, get the right part, then install it myself. When you're in a relationship with someone who likes to fix things, it's easy to sit back and let them. But when you're single and not wanting to part with one more cent than you have to, being independent is a huge deal. 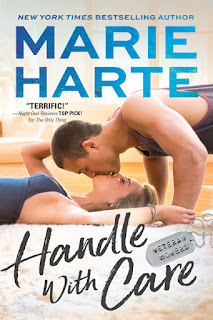 I wrote about an independent heroine in HANDLE WITH CARE (HWC), and in a lot of ways, she faces what I face--well, except about having a hunk of a man dying to go out with her. (I'm still working on that!) In HWC, Kenzie has been raising her younger brother on her own for the past thirteen years, ever since her parents passed away. She's a graphic designer who runs her own company. And though she has wonderful friends she calls family, a lot rests on her shoulders.

I liked writing about her because she's strong yet vulnerable when it comes to love and men. She's also had her heart broken by the one man she let in, and it's made her wary of opening up again.

The hero is strong and has to recognize the heroine's strength as well. I admit, I'm a sucker for an alpha male type who displays beta tendencies--listening, caring, not taking over. Evan, the hero, is a former Marine and all around amazing guy. But he can't solve Kenzie's problems. Only SHE can.

So yeah, not having the hero come in to sweep her off her feet. I mean, he tries to, and on some levels he does. But ultimately, it's up to Kenzie to let him in or keep him out. And that's why I'm particularly loving this new book. Because it's about a woman figuring out what she wants, then deciding if and when to take it. If you find yourself in the mood for a funny, heartfelt, emotionally driven book, check out HANDLE WITH CARE, coming Aug 27th. Then go fix your fridge and your garbage disposal, because you can. :)

And because I'm curious, feel free to share something you've done/fixed that's made you feel independent lately.