One Dark Wish and a Recipe for Sarah's Soothing Salve

It's so hard to believe that the book I wrote last year, ONE DARK WISH, will be on sale on September 24, 2019. Less than two months until the second book in the Deadly Force series comes out! 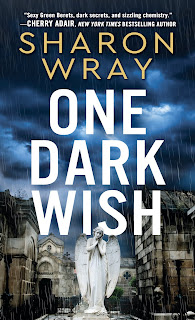 In this romantic suspense story about ex-Green Beret Nate Walker, a man desperate to regain his honor, Nate meets his beautiful-yet-stubborn heroine Sarah Munro. Sarah, a renowned historian determined to save her faltering career, is looking for proof that a young woman accused of witchcraft in 1699 was innocent of murder.

While studying this young accused witch named Rebecca, Sarah discovered that Rebecca had been a practitioner of 17th century herbal remedies. Sarah has not only spent years searching for proof exonerating Rebecca, but she's also learned how to recreate many of Rebecca's teas and salves.

After Sarah meets Nate, and sees that he suffers from migraines and was burned weeks earlier (in EVERY DEEP DESIRE), she offers him one of her herbal teas and rubs a soothing salve on his (naked!) arms.

In anticipation of ONE DARK WISH's release, here is the recipe for Sarah's soothing salve. This is not a medication, just a recipe for a homemade salve that has eased many mild sunburns on my children's arms. And worked really well on Nate--so well that he fell in love with Sarah! Set up a double boiler and heat over the water using a low temperature.
Heat the beeswax, keeping the temperature low and steady. When the beeswax is melted, add in the coconut oil. Stir until both ingredients and melted and blended.
Stir in the honey and Sea Buckthorn oil. Whisk over the low heat until all the ingredients are well blended. This should take between 30 and 60 seconds.
Remove the pot from heat and place on a towel on the counter. add in the ale vera get and stir for another minute. Pour the salve into the glass container and let sit, uncovered, for 6-12 hours until fully harden.
Cover jar. When not in use, keep in a cool, dark cabinet.

Her acclaimed debut book EVERY DEEP DESIRE, a sexy, action-packed retelling of Romeo and Juliet, is about an ex-Green Beret determined to regain his honor, his freedom, and his wife.
Her second book, ONE DARK WISH, will come out September 24, 2019 and is available for preorder here: Amazon |  Barnes and Noble | Books-a-Million | iBooks |  Google
EVERY DEEP DESIRE is available on: Amazon | Barnes and Noble | iBooks | IndieBound| Kobo|  Google