My Writing Space! By Alyson McLayne

By Alyson McLayne August 16, 2019
❤ ❤ ❤ ❤ ❤ ❤
Recently, I was asked where do I write? And I thought, what a great question! So here it is…pictures included (no Jaspers were hurt during the making of this post!).

I write at home mostly, which means when my kids (twin 7-year-olds) aren’t at school, on a play date, or out with their dad, I write around them. So basically, I wear ear plugs. A lot. And I relocate from chair to chair and room to room. A lot. I’m kind of like a writing vagabond, moving around the house carrying my lap top, charging cord, coffee, muffin, phone, pens, highlighter, story outline, and ear plugs looking for the quietest place to write.
I drop stuff. A lot.
I don’t really have an office or a desk because I use my laptop as an actual (gasp!) laptop. Any comfy chair can become a work station for me. But I do have a recliner in my bedroom that I’ve had for years and years. The kids call it mommy’s writing chair. I’ve added a little bookshelf and drawer unit beside it, and I can put things on the dresser like my big, desktop calendar. By far the best thing about this set up is that I can practically roll right into bed when I feel a nap coming on!

Oh yeah. And that’s Jasper. He likes my chair too, and when I vacate it, he takes up residence. I’d like to say he gives it up willingly when I come back to write, but he likes to do THIS when I start working again:

One of my favorite places to write is the big, comfy recliner in my kids’ bedroom. It’s a cheerful room with a good vibe and lots of light. Sometimes. Other times it’s covered in filth. OK, maybe not filth, but there’s so much crap on the dresser—clothes, toys, books—I can barely see the top of it. Also, Jasper follows me wherever I go, and he spends the whole time snuffling the floor, beds, and dresser for errant food, tissues, and terrified stuffies to eat. It drives me batty.
Alas I have no photo of the kids’ room. I swear it was nice and clean the night before I took pictures…
The other place I write is my living room. No recliner in here, but I do have 2 comfy leather armchairs. I can multitask from this spot—neighborhood watch and romance novelist at work! At Christmas it’s nice because the tree goes right where the glass table is and I can bask in the twinkling, colorful lights, while writing about Highland lasses dancing with their lairds.

I also write outside the house. Sometimes in a coffee shop, but most often…in my car! The reason I started doing this was because of the munchkins. When they were in preschool, I would have 2.5 hours, 2 – 3 times a week of alone time, with no internet and no household distractions. It was perfect!! Now I use it when I take the kids to their after-school activities: ballet, gymnastics, music lessons, etc. I drop them off, push back the passenger seat, open my laptop and start typing. Sometimes I’ll even message friends and we’ll do a 45 minute writing sprint together.
And since we all know what a car looks like (boring), here’s a picture of my van…with Jasper inside…wearing a purple scarf. Much better.

Isn’t he a handsome boy?
Sometimes I dream about having my own office—a little cottage on our property, far enough away from the house and kids that I’m not distracted during writing time. I’d put a really cool desk in there, with book shelves, a comfy couch for napping, and probably my old writing chair. And a dog bed for Jasper. This would be perfect:

Or this one is even better! (Because who doesn’t want to live in a Hobbit house?)

But until then, I’ll just be on the lookout for a soft chair in a quiet corner.
❤ ❤ ❤ ❤ ❤ ❤
Alyson's latest release, HIGHLAND CAPTIVE, book 4 in her series The Sons Of Gregor MacLeod, is out now!
EXCERPT: 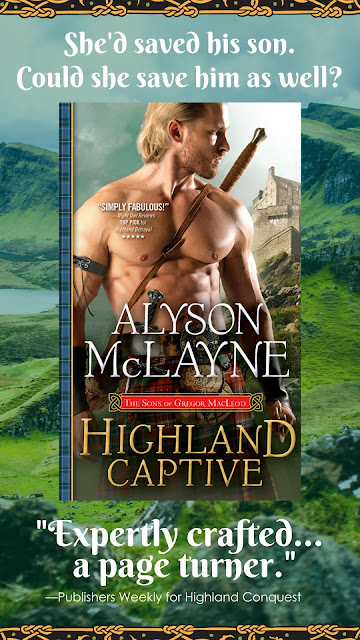 Gavin stopped beside her, and she glanced up to find him watching her. Their eyes locked and held for a moment, and everything within her stilled.
He lowered himself to the edge of the bed, facing her, and from behind his back, he produced a box. It was wrapped in a soft, yellow cloth and tied with a blue ribbon. “This is for you,” he said quietly, handing it to her.
She stared down at the box, wondering. What could it be? And why was he giving it to her?
“It’s so pretty,” she said. “Is it for Ewan?”
“Nay, Deirdre. I said it was something for you. Open it.”
Her heart began to race, and her chest squeezed. “You mean…like a…a…”
“A gift,” he interjected. “Have you ne’er received a present before?” He said it as a jest, a small laugh puffing past his lips before he realized she wasn’t smiling. “Deirdre?” he asked.
She could hear the incredulity in his voice. She raised her eyes to his, feeling like she might cry. “Nay, I’ve ne’er received a gift just for me before. Other than Ewan, of course. But he wasn’t Lewis’s child to give.”
“He’s my child to give, and I freely gave him to you. Although I doona like the idea of ‘owning’ Ewan. And I think he chose you as much as you chose him.”
Now the tears did fall, silent streams down her face. “Thank you,” she whispered. She looked at the present in her hands. It was relatively flat and covered her lap. It had some weight to it and felt like the box might be tin. She grasped the end of the ribbon. “Do I just…” And she pulled a little.
He wrapped his hand over hers, the heat and strength of it engulfing hers, and helped her tug. The ribbon came loose, and the cloth fell away over her skirts, revealing a metal tin, as she’d suspected.
She lifted it up, and something slid around inside. Her eyes rose to his.
“Open it,” he encouraged. She could see he was excited to give it to her—something he’d chosen that he’d thought she would like. That he wanted her to like.
And that was the gift he was giving her. It didn’t matter what was inside. Despite his conflicted feelings about her relationship with Ewan when they first met, this man, who had already given her the greatest gift possible, had looked for and bought something for her. Only for her.
Something to please her.
She didn’t think. She just leaned forward, cupped his cheek with her hand, and pressed her lips to his. 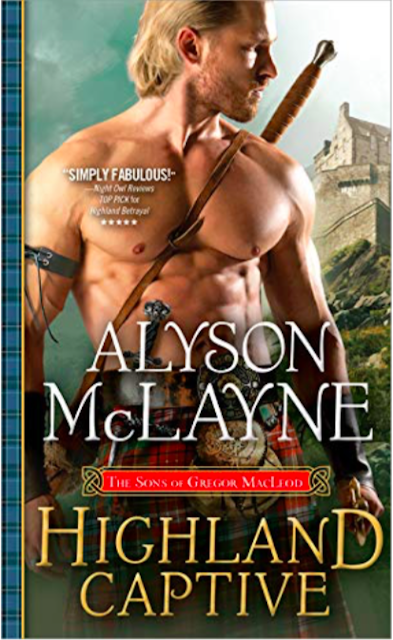 SHE'D SAVED HIS SON. COULD SHE SAVE HIM AS WELL?   Laird Gavin MacKinnon is a changed man—and not for the better. Even since his young son, Ewan, disappeared two years ago, Gavin has grown callous and bitter. Scouring the countryside, his search leads him to a mysterious woman who maintains the boy is hers. He decides to take them both and ask questions later.
Deirdre MacIntyre will go with the brooding laird if it will keep her son safe. Gavin has to admit that the beautiful lass has a bond with Ewan, and things aren't adding up. When Deirdre's clan comes to claim her under threat of war, Gavin has a choice to make: fight for her or let her go.