By Cindy Dees June 27, 2019
Ohmigosh gang, I'm so excited that release day for BEYOND THE LIMIT is finally here! I've been writing for 25 years and publishing for almost 18, and I've finally got my first book coming out with Sourcebooks! 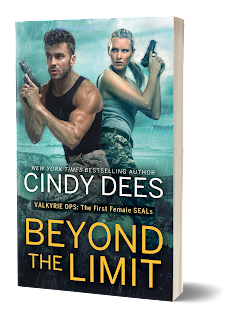 As a total aside, anyone want to guess the reason there's a 7-year difference in how long I've been writing and selling books? I'll tell you at the end of the post.

This book got a glowing review from Publisher's Weekly, who said, "...readers will delight in the double pleasure of smart, tough women succeeding in their field and pretty, witty heroines winning the hearts of military men."

Also, it's featured in Cosmopolitan Magazine as one of the Summer's Five Hottest Reads, which calls it bingeworthy, smoking hot, and will make you"pant like a puppy."

This book actually started rattling around in my head roughly 25 years ago. I was a pilot in the Air Force and tasked to fly C-5's (ginormous cargo airplanes) for the Navy SEALs so they could practice jumping out the back of them. Now, why anyone would want to jump out of the back of a perfectly good airplane is a total mystery to me. I mean, what kind of moron jumps out of airplanes anyway? Oh, wait. Me...and my husband...never mind.

It got me thinking about what it would take for any woman to become a SEAL.

Fast forward twenty years or so to the first World Crossfit Games, where women kicked butt and took names. Crossfit was started by a former SEAL and based on how SEALs train. It turns out the top several women in the world at the Crossfit Games every year actually meet all the SEAL requirements to enter BUD/S training.

Which means there are only two hurdles left to clear:

1) a world-class female athlete has to be in the Navy and want to be a SEAL.

2) male SEALs have to let her try, and if she earns it fair-and-square, let her onto the teams.

Of course, number two is undoubtedly the larger hurdle to clear.

When Sourcebooks called me and asked if I'd be interested in writing a book about the first female SEAL, I leaped at the opportunity. But, I quickly realized I had a real challenge on my hands. I've worked with enough SEALs over the years to know that as a group, they've historically been strongly opposed to women operators running on the teams.

This meant that, if my book was going to be the slightest bit realistic, the hero and his buddies were going to have to be deeply skeptical of women SEALs and even outright opposed to them. In fact, they would need to do everything in their power to convince the women not to be SEALs. (Let the record show, EVERY candidate at BUD/S is worked over like crazy to convince him not to become a SEAL.  You have to want it so bad you put up with everything they throw at you and still keep on going.)

A few early readers of BEYOND THE LIMIT have been unhappy with how skeptical my hero is of my heroine, but to be honest, I doubt his opposition is anywhere near as strong as actual SEALs' would be. I do believe, though, that the right woman, with the right physical ability and attitude could ultimately win the guys over.

Oh, and why the 7-year delay between starting to write and starting to publish? Beside having to learn how to actually write a book properly, I had to wait for my White House security clearance to expire, which took 7 years. I was not allowed to punish anything during that time. It's also why I never write scenes placed in the White House. I would hate to accidentally mention some detail about the building that is part of presidential security measures or reveal anything that might endanger the life of the President.

BEYOND THE LIMIT is a sexy, snarky, romantic suspense with a smoking hot SEAL team and the spunky, badass women they train to be the first female SEALs.

Here's the Amazon Link to buy it.

Here's the Barnes & Noble Link to buy it. (Or whatever they end up getting called in their never ending saga of changing leadership and ownership.)

Here's the Kobo Link to buy it.

Here's the Google Play Link to buy it.