By Terry Spear May 29, 2019
“Terry Spear continues her popular Wolf & SEAL Wolf series with the story of Brock and Natalie who don’t want to have anything to do with dating but are thrown together by the unlucky task of grabbing the wrong bag at the luggage claim at the airport. Showing that a minor mistake can lead to danger and love. Can a family of lone wolves fit into a pack? Can hearing a voice change your life. They answer is YES if the SEAL Wolf Surrenders. I’m always ready for the next Terry Spear books. Which SEAL Wolf will be next or will she go in a different direction and give us the story of an Army Ranger by the name of Shawn? Just a Hint Ms. Spear!!!”~~Kim Roller, Goodreads
Shoshana Frank said:  “Spear’s latest paranormal romance is filled with high action, heart-pounding chemistry, and a wolf-pack of vivid characters.” Booklist
For a shifter with no interest in she-wolves…he sure is territorial.
Wolf shifter and former Navy SEAL Brock Greystoke isn’t interested in she-wolves. The last one in his life ambushed him with the intent to kill. So when he’s tasked with helping his cousin’s friend get to a wedding, he has no intention of getting involved with her…
She-wolf Natalie Silverton has inadvertently crossed a group of dangerous criminals, and she’s in dire need of a bodyguard. Good thing Brock is there to protect her. At every turn, their work—and play—brings them closer to catching the criminals and to each other, but Brock will have to get them out of this alive if he has any hope of winning Natalie’s heart.
SEAL Wolf Series:
A SEAL in Wolf’s Clothing (Book 1)
A SEAL Wolf Christmas (Book 2)
SEAL Wolf Hunting (Book 3)
SEAL Wolf In Too Deep (Book 4)
SEAL Wolf Undercover (Book 5)
SEAL Wolf Surrender (Book 6)
https://play.google.com/store/books/details/Terry_Spear_SEAL_Wolf_Surrender
https://itunes.apple.com/us/book/seal-wolf-surrender/id1447278682?mt=11
https://www.booksamillion.com/p/Seal-Wolf-Surrender/Terry-Spear/9781492677291?id=7079882685730
https://www.barnesandnoble.com/w/seal-wolf-surrender-terry-spear/1129309843?ean=9781492677291#/ 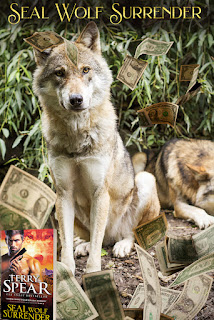 When the wolves get into the thick of it, it's time for the bad guys to get out of the counterfeit money business, or else!

Counterfeit money is big business. I was talking to a friend who works at a bank in security and I asked him about the money. He said a teller took a $20 bill from someone that was a fake just this past week. Bank had to eat the loss because they didn't catch it in time. So the question is, was the person dropping it off a good guy or bad? And was he or she a wolf?

Have fun with SEAL Wolf Surrender! Hope you love it!! Next up is the 10th Anniversary release of Destiny of the Wolf!