Valentine's Day: It's Not All About the Candy, Flowers, and Hearts

By Sharon Wray February 05, 2019
In less than ten days, we'll be celebrating one of my favorite holidays: Valentine’s Day. 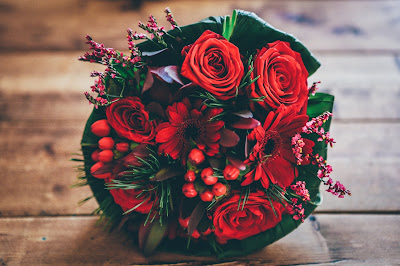 Because of the history behind this holiday, it even plays a part in my romantic suspense novel EVERY DEEP DESIRE since the prologue, where the heroine Juliet discovers her husband Rafe has supposedly abandoned her, happens on Valentine's Day.
I love this holiday, not because of the chocolate or cards or flowers, but because of the man himself. A courageous Bishop known as St. Valentine.
Born during the reign of Claudius II, a Roman Emperor who hated and persecuted early Christians, St. Valentine was an early Bishop who married young couples in Christian ceremonies in flagrant violation of Claudius II’s edicts. Since Claudius II believed his soldiers fought better without wives or families, and he hated Christianity, he had St. Valentine arrested.
Turns out St. Valentine had also been marrying couples right before they were martyred and had been aiding the Christian families of those left behind. Enraged, Claudius II told St. Valentine to renounce his faith or be martyred. After St. Valentine gave a forceful “No“, Claudius II had St. Valentine beaten with clubs and beheaded outside the Flaminian Gates in Rome on February 14, 269 AD (approx year).
According to legend, two days before his execution, St. Valentine miraculously healed the jailor’s blind daughter and on the day of his death left her a letter signed “your Valentine“. 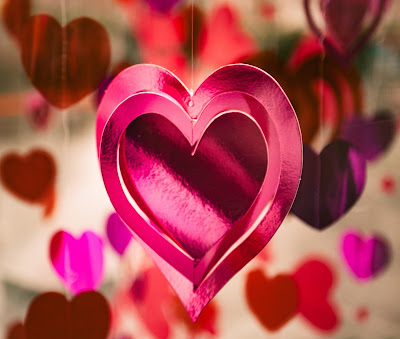 Sometime between the years 492 and 496 AD, the date February 14 was chosen to replace the February 15 pagan feast known as Lupercalia, a day set aside to worship the pagan god Lupercus. On this day, young Roman men would draw the names of young women whom they would then keep for a year as their sexual companions.
Pope Gelasius I, not happy with this annual event, came up with a new lottery. On February 14, young people would choose the name of a Christian saint whose example they would try to emulate throughout the year. But since young men still hoped to seduce young women by sending them handwritten notes, the Pope elected Saint Valentine to be the patron saint of the day. Hence the custom of sending cards from “your Valentine“.
Below is an excerpt of the prologue from EVERY DEEP DESIRE. Although it's sad, made even more so because it takes place on Valentine's Day, I promise there's a happy ending!
PROLOGUE

Juliet’s daddy had always told her to stay away from men who bowed. But tonight, as she struggled with her groceries in the snow, she almost asked the stranger in the shadows across the street for help. He bowed as she walked by and, as creepy as that seemed, she was reconsidering her daddy’s warning. It was still Valentine’s Day, after all.

She blinked against the freezing wind, and the man had disappeared. She made it to her apartment and almost stepped on the ivory envelope. Balancing her bags in one arm, she picked it up. From its weight and polished paper, a letter instead of a bill.

A valentine, maybe? From Rafe?

Flurries blew as she unlocked the door. Five months apart. Five months since their argument. Five months and he’d finally sent her an apology. The ache in her heart loosened, and she went inside. Frigid, mildew-tinged air blasted at her, and her breath came out in cold, white gusts. The heat was off. Again.

She placed the bags on the kitchen counter and turned the envelope over. The linen stationery felt thick and expensive. Someone had sealed it with a wax stamp of a sword piercing a heart and written her name in script on the other side. It wasn’t Rafe’s familiar, irregular printing.

After trading her coat for her favorite sweater, she curled up on the couch. Her husband was undercover with his A-team. Had someone else sent the letter on his behalf? It wouldn’t be the first time he’d broken the rules. Still, five months wasn’t the longest they’d gone without contact. Last year he’d been away for eight. Except this goodbye had been different. They’d argued, said things she prayed they hadn’t meant, and hadn’t made love before he left.

Something that had never happened before.

She held the letter to her heart and looked at the unpacked boxes stacked around her. Rafe had left the week they’d moved from Fort Bragg’s temporary housing into this apartment, days after his mother’s funeral, and she’d refused to unpack completely. Without him, it didn’t feel like home.

Worry and lack of sleep had left her exhausted. Nightmares plagued her nights. Dreams she’d had since childhood that only Rafe’s touch could heal. For the past few weeks, she’d been obsessed with a heavy feeling in her heart she could only define as doom.

She broke the seal and read. The back of her throat burned. Her sweaty hands gripped the edges of the stationery, tearing it. And she read the letter again. It wasn’t a valentine.

No. No. No.She fell off the couch and crawled to the bathroom. She barely made it before the eruption hit. Minutes later, she rinsed her mouth and leaned her forehead against the window. The room smelled like vomit, bleach, and mold. It reeked of betrayal.

Outside, the moon hung full, like on the night he’d left. Another wave of nausea drove her to her knees. She rolled into a ball, her arms tucked in close. He wasn’t dead. He just wasn’t coming home. Ever.

The doorbell rang, and she ignored it. She lay there for minutes or hours or days. When even the moon turned in, she shifted onto her back and stared at the stained ceiling. The brown concentric circles reminded her of constellations. The star patterns she and Rafe identified together out on the Isle when they were kids.

“Pegasus.” She raised one arm to reach the sky. The winged horse constellation had been her favorite, only visible a few weeks of every year. She’d always dreamed of flying away from the Isle, her father, her poverty. But instead of reaching the stars, she’d married the man she’d adored since she was four and he was eight.

When the doorbell rang again and again and again, she got up, determined to send whoever the hell it was away. She flung the door open to find two Army MPs in full uniform, wearing pistols, standing side by side. Their grim faces shared identical hard angles. Cold air burst into the room, chilling her even more.

“Ma’am.” The second MP held out a pair of handcuffs. “You’ll need to come with us.” 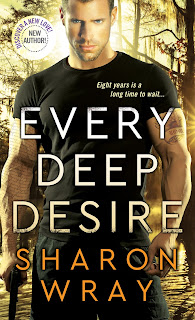 Her acclaimed debut book EVERY DEEP DESIRE, a sexy, action-packed retelling of Romeo and Juliet, is about an ex-Green Beret determined to regain his honor, his freedom, and his wife.
EVERY DEEP DESIRE is available on: Amazon | Barnes and Noble | iBooks | IndieBound | Kobo |  Google