By Sourcebooks Casablanca December 03, 2018
Decoy Date, book 4 in The Wedding Date series, is available now!Fake relationship. Real feelings. Big problems.
Brody O’Donnel doesn’t believe in happily-ever-afters—at least, not for himself. But he wants the best for his vivacious, beautiful friend Gwen Danes, and he’s tired of watching her pine for a clueless man. Figuring a little bit of jealousy will motivate the guy, Brody proposes a fake relationship. It’s an outrageous plan, but Gwen figures there’s no harm in it—until they share a passionate kiss she never saw coming. Suddenly, Gwen’s fighting a growing attraction to a man she knows she can’t have. After all, he’s just faking it…isn’t he? 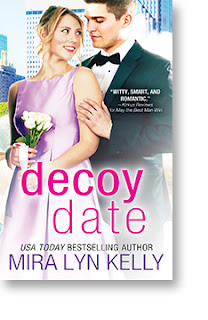 “How about the bar. How did you get into that?"
More relaxed, Brody made another one of those considering faces before answering. "I grew up wanting my own restaurant. The plans for the bar came later. My grandmother owned this swank place in Manhattan, and I thought there wasn't anything better."
"Your grandmother?" Could this guy get any better?
And the answer was a resounding yes, because then he was doing that thing where he reached back, pushing his big hands through the untamed curls of his hair, making his shirt stretch tight over his chest and arms. Nice. Brody slid the elastic off his wrist to bind the hair that liked to fall in his face. It wouldn't stay that way for long. Within fifteen to thirty minutes, she'd bet all those wild red-brown curls would be back on the loose.
But for now he settled back against the cushions. "Yeah, the story goes that my grandfather opened the place before he met her. And one day she came in to the place with a date who'd done her wrong. Big mistake. She had a temper, and apparently wasn't afraid to show it. So when she finished chewing this date out, Fiona was getting up to leave and my grandfather stopped her to offer her a job. He thought she could keep the kitchen running with that fiery Irish temper."
Gwen was getting that warm swelly feeling in her chest as she leaned forward eager to hear more. "And then he fell in love with her and taught her to run the place?"
Brody coughed out a laugh. "Not quite. She told him what he could do with his offer and suggested if he had a better one, he had until she was out the door to give it to her. So he asked her to marry him instead."
She was up on her knees, her chocolate set on the table behind the couch so she could clutch her hands over her heart. "That's even better. No wonder you're such a romantic!"
"Oh Gwendolyn. You give me those eyes and tell me I'm the romantic?" he asked with a shake of his head. "Hate to ruin it for you, but Fiona thought her husband had rocks in his head. Remember this is the woman who raised my mother. The happy ending to Fiona’s story was if her husband hadn't died within a year of marrying her, she would have left him, new baby and all...but in the end she got the restaurant. And one summer I got to stay with her and she taught me to cook and—"
Gwen's brows crumpled, that warm swelly feeling in her chest deflating in a rush. "Wait what? No." She leaned forward poking him in the shoulder. "That's the worst love story I ever heard!"
And now he was laughing for real, those deep green eyes flashing at her as he wedged himself further back into the couch cushions. "Love story? Sorry but that’s not really how the women in my family are. Hey!" he yelped, when she poked him again. "Didn't anyone ever tell you not to poke the bear?"
Oh yeah, some bear. She'd heard people call him that before, because he was so big she guessed, but the only kind of bear this guy was, was a Teddy Bear. She poked again, and again because— "Yes, love story! You totally set me up."
Poke. Poke.
"Gwen."
She was pretty sure that was supposed to be some kind of warning, but no way could she take it seriously when the big guy was literally trying to wiggle away amid those deep rumbling laughs.
Poke.
Only then, lightning fast, the world spun and Gwen found herself laid out across Brody's lap, held in place by the strong hand still wrapped around her wrist and the solid arm supporting her back. She blinked up into Brody's too green, too deep, too soulful eyes, caught there and held. The laughter died between them and she swore, even as tight as he was holding her, the world shifted again…