By Sourcebooks Casablanca November 30, 2018
The fourth of the Night Riders’ crew finds redemption in the love of a beautiful woman in Someone Like You, an emotional historical Western romance!

Only she can heal his battered heart…

When Rafe Jerry was ordered off his family’s California ranch, he swore never to return. Instead, he ran away to war, where the harsh realities of battle transformed him into a crack soldier—and an unexpected betrayal made him a man to be feared.

Now the war has ended and Rafe is left with two goals: track down the man who betrayed his brothers-in-arms, and fight for the land that should have been his. He has no room in his hardened heart for love…but Maria de la Guerra is like no woman he’s ever known. With her gentle strength and endless compassion, she may be his only chance to let go of the pain of the past—and finally be free.

The war has changed them all, and each of the Night Riders must decide what is more important: love or revenge? 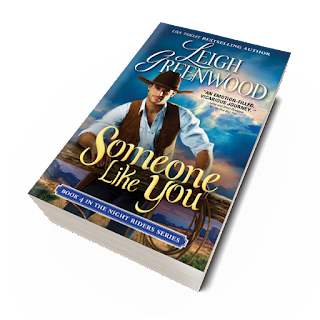 Maria allowed herself to kiss him back the way she’d been wanting to kiss him since the first
time he’d kissed her. She wrapped her arms around his neck, pressed her body against his, and
covered his mouth with a needy eagerness.
This new Maria wasn’t afraid to acknowledge what she wanted, wasn’t reluctant to
demand that she get it. She didn’t wait for Rafe to deepen their kiss, ratchet up its intensity, or
decide its length. Nor did she wait for him to pull her firmly against him so she could feel the
hardness of his muscles, the breadth of his chest, the strength in his arms.
She tried to reason with this new Maria, to tell her that Rafe loved her, wanted to marry
her, that they would have years to explore what it meant to be together as man and wife, but the
new Maria wouldn’t listen. She wanted everything, and she wanted it now.
For a moment, she could feel Rafe hesitate, but she didn’t mean to let him pull away.
With slow deliberation, she dropped her arms from around his waist, reached up and placed one
hand on each side of his head. She brought his face toward her and let her tongue invade his
mouth.
All hesitation on Rafe’s part stopped there.