Excerpt from Recklessly Ever After


After the hell I’ve been through in the Marines—in life—there’s nothing I crave more than routine, stability, peace. Until McKenna Brewer walks into my life.

She’s impulsive, fiery, tempting as hell, and everything I don’t need. But when she offers me a night of no-strings-attached passion, I can’t resist.

When our night together has unexpected consequences, I can’t help but think this might be the perfect opportunity to show McKenna just how much I want her.

The only problem? She doesn’t do forevers. But forever is exactly what I need with her.

Recklessly Ever After is available now! Enjoy this excerpt! 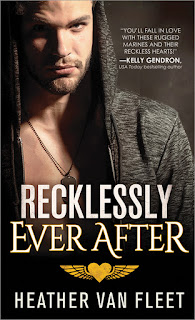 With a couple of nineties rom-coms tucked inside my purse, and a fresh carton of Ben & Jerry’s  in a bag hanging off my forearm, buried in the bottom of my purse, I was determined to make up for lost time.
I knocked twice, like always. Once to make my presence known, and the next to make sure Max wasn’t in there screwing one of his many flavors—though I didn’t see his car either. Unlike every other time I’d stopped by, nobody answered…at least at first. But then I heard it—a grunt, followed by a, fuck me and then an, I’m coming, hold on.
“Oh, God.” I took a step back, looking over my shoulder toward the driveway, more than ready to run.
No, no, no. I knew that voice.
There was no time to escape, though, because a second later he was there. And quite frankly, my legs weren’t capable of moving, either. Because the moment that door whipped open and I saw him standing there, I was screwed with a capital S.
“McKenna…” He said my name on an exhale, while his hypnotic green eyes raked over me in one long, agonizing swoop. His cheeks grew bright red—making him look bashful and, adorable, not the tough- guy like his friends tried to be. When he bowed his head, I took a second to look him over too, frowning when I noted a clump of black sticky, gooey stuff clinging to the ends of his lashes, and a smearing of something shiny and red on the corners of his lips and clinging to his beard.
“H-hi.” I cleared my throat, attempting to remember why I was there in the first place. The intensity emitting from this man tended to make me forget pretty much everything.
“What are you doing here?” He folded his arms over his massive chest. The same chest I’d touched… The same chest I’d kissed…
I blinked. “W-where’s Addie?”
He frowned and that beard of his shifted, conforming with the movements of his jaw. “Grocery store. She asked me to watch Chloe for half an hour.”
“You? Watch Chloe?” I snorted.
“Yeah. Me.” His eyebrows drew together as he propped one hand against the door frame, a dare in his words that said, challenge me and you will lose.
Except I highly doubted this man could ever beat me in a match of wits. Regardless, he did have me mesmerized, like as always. His hotness, his coyness, the vulnerability I knew he embodied… Total. Human. Catnip.
I swallowed, watching his forearm flex. Gavin was humongous in every sense of the word. I may might have been a little tipsy when we’d had sex, but the delicious soreness between my legs the next morning proved that big was so very worth it.
My face grew hot at the memory, my mouth opening and closing like a dunce’s. Who was I? Where was I? And why the hell did I have an unexplainable urge to drop to my knees before him?
Because you like him.
I frowned and held my chin up high. “Mind if I come in and make sure you didn’t tie the tyke up?” Without waiting for a response, I ducked under his outstretched arm, holding my breath as I did. Unfortunately, the air in my lungs did little to block the heavenly, masculine smell he emitted. Spice, pine, soap… The combination made my lady parts tingle and my head spin in remembrance.
I didn’t do men for more than a night. Not anymore. Not since Penis-Head Paul. So, what was my issue? One and done, that’s the way it was supposed to be. Not third time’s a charm, damn it.
Ignoring his are-you-kidding-me expression, I headed into the living room, finding the coffee table filled with all things princess. Crowns, feather boas, fake earrings, and… “Is that makeup?”
He cleared his throat. “Yeah, um, give me a second, would ya?”
I grinned at him, watching, yet again, as he bowed his head—this time rubbing at the clingy black goo on his eyes and, yes, the red lipstick on his beard.
Oh. My. God.
He’d let the kid put it on him?
Be still, my beating heart.