Excerpt from Between a Highlander and a Hard Place

By Sourcebooks Casablanca October 26, 2018
A fierce Englishwoman on the run...
A Highland Laird who needs a proper wife...
And a desire neither can resist.

Athena Trappes thinks she’s in love…until she discovers the scoundrel only wanted her as his bit on the side. Enraged, she does what any spirited Englishwoman would do: set fire to his belongings, incur his dangerous wrath, and flee—immediately. With nowhere else to turn, she seeks freedom in the wilds of Scotland.

Highland Laird Symon Grant lost his wife years ago, and it’s his duty to find another. Athena is not exactly what the clan has in mind for him, but Symon’s heart burns with unexpected passion for the woman who would risk everything to be free.
***

Between a Highlander and a Hard Place is available October 30th! Enjoy this excerpt! 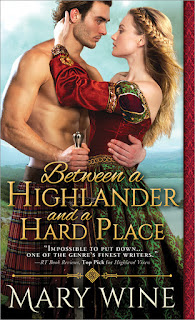