The Pleasure of Re-reading


Recently, I had the urge to re-read an old favorite book – The Unknown Ajax by Georgette Heyer. And not for the first time. In fact, I don’t even know how many times I’ve read it over the years. 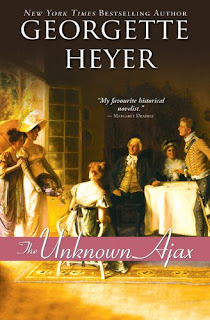 And why is that, I wondered. What do I go back to some novels again and again? Why is it so comforting to re-visit these stories? Obviously, I know what’s going to happen from one page to the next. There are no surprises lurking to amaze me.
I decided that there are two main reasons, for me, to go back to a book. First, I want to spend time with the characters. It’s like getting together with old friends, moving into their world for a while. I feel the same way about Sherlock Holmes and Frodo and Sam as about the Darracotts. And many others.
And equally important, it’s the language. The two are inseparable. A writer doesn’t create memorable characters without a striking style. The way Georgette Heyer puts words together fills me with joy. For example,
In her view, Vincent was a dangerous blade, with a viperous tongue, and a deplorable influence over her impressionable young son; but after spending three hours in an atmosphere of deepening gloom, she would have been much inclined to have welcomed the arrival of Beelzebub himself.
Who could resist such a sentence? And Heyer keeps them coming throughout the book, right up to the hilarious tour de force ending. I never tire of her mastery.
What are your favorite re-reads?