For the last four years I've worked solid, only taking trips to writer's conferences or autographings. Never for my own enjoyment.

But....next month I'm going to the beach! My sister and I have rented a beach house for a whole week.

I'm pinching myself, wondering if this is real.

Yep, it is. It's located on Bolivar Island in the Gulf of Mexico. You have to take a ferry from Galveston, TX to get to it. The pirate Jean LaFitte used to have a home on the island and for a time used it for a base of operations.

There also used to be a fort here in the early 1800s called Fort Las Casas. The "Mother of Texas" Jane Long wintered in the abandoned fort with her toddler, a maid, and her dog. Jane gave birth to a second child. Their food was running out and she only had a rusty cannon for defense. To make the Indians think the fort was still inhabited, she fired the cannon each morning and raised a red petticoat up the flagpole. Her efforts kept them away. 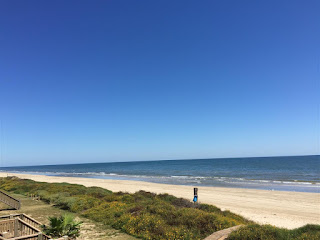 No, I won't be doing any of that stuff. I'm going to lie on the beach, soaking up some sun, listening to the waves. Dreaming up a new story.

Relax and Renew will be my motto. Come and join me. We can all use some lazy time.

Where do you go when you need to push the pause button?