By Juliet Lyons October 04, 2017
Drop Dead Gorgeous, book 2 in the Bite Nights series is out now!! 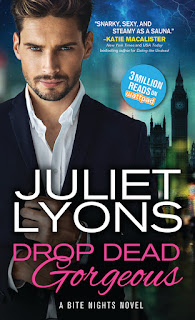 About the book:
Swipe right for Mr. Bite
Mila Hart’s first experience with the hot new vampire dating site is a complete disaster. Turns out, her date is wanted for murder! But things turn around when she’s rescued by dashing vampire cop Vincent Ferrer. Dangerous and drop dead gorgeous, he’s just the vampire hottie Mila was hoping for.
Haunted by his past, Vincent can’t risk falling in love again, even if Mila charms him more than anyone he’s ever met. But when the killer from Mila’s first date seeks her out, Vincent is the only one who can protect her. Protecting his heart is a different story…

What the critics are saying about the BITE NIGHTS series:

"Snarky, sexy, and steamy as a sauna, Dating the Undead will have you throwing out your vampire slaying kit." - Katie MacAlister, New York Times and USA Today bestselling author of the Dragon Fall and Aisling Grey, Guardian series

"Quick, sharp wit that sinks its fangs into the reader and doesn't let go!" - Molly Harper, acclaimed author of Sweet Tea and Sympathy and the Half-Moon Hollow series

"Combines the familiar with the new to bring a fresh spin on the vampire romance." - Kirkus

-A madcap adventure of biting humor, steamy chemistry, eclectic characters and some over-the-top antics. A strong and personable heroine delights as she navigates her way through the treacherous waters of online dating.- - RT Book Reviews

"Lyons delivers with hot and heavy scenes that take the sexy vampire trope to an all new level." - Booklist

"If you're looking for a story both light and sexy, this may just be the one for you." - Heroes and Heartbreakers

"Guaranteed to keep you reading well into the night." - BookPage

About Juliet
Juliet Lyons is a paranormal romance author from the U.K. She holds a degree in Spanish and Latin American studies and works part time in a local primary school where she spends far too much time discussing Harry Potter. Since joining global storytelling site Wattpad in 2014, her work has received millions of hits online and gained a legion of fans from all over the world. When she is not writing, Juliet enjoys reading and spending time with her family.
Find out more at www.julietlyons.co.uk