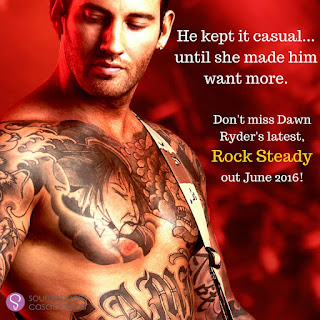 That word brings a ripple of anticipation to everyone who has been longing for warm weather, sandals, beaches, carnivals, and so much more. Rock Steady is the perfect summer time read. It’s hot, it’s edgy, it’s got bad boys—hey, what would summer nights be without a little misbehavior? And the one thing I really wanted Rock Steady to have was a lack of people shooting at people.

Don’t get me wrong, I love to write a hard suspense plot but sometimes, you want to read a good, hot, romance without all the life and death struggle. All the edge, all the heat, but with a focus on the personal issues that come with having to make a relationship work beyond the physical attraction.

Rock Steady will take you back onto the road with Toxsin. Now for anyone who thinks Rock Stars have it all easy, take a look at Rock Steady and you’ll get a little taste of the dedication it takes to be a mega super star. Personally, I have a deep respect for those who can apply their talent to the concert stage. It’s a hard job, one that requires team work to accomplish a show that is mind blowing for the ticket holders. A fabulous voice isn’t the only requirement.

For those who picked up Rock Me Two Times, you going to get the chance to see Ramsey, god that he is, meet his match. It was a blast to write this book and I’m eager to present it to all of you. 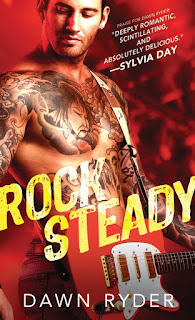 HE KEPT IT CASUAL
Superstar guitarist Ramsey’s reputation as a bad-boy rocker is exceeded only by his dedication to his music. He’s worked hard for the success of his hit metal band Toxsin, and he intends to enjoy it—completely. When a jilted groupie gets back at him for a one-night stand with an intimate—and completely inappropriate—tattoo, he needs it fixed, and fast. Sparks fly between Ramsey and his new tattoo artist, and Ramsey finds himself hoping for more than new ink.

UNTIL SHE MADE HIM WANT MORE
When a high-profile tattoo job lands Jewel an invite on Toxsin’s latest tour, she can’t say no. It’ll be great exposure, after all. What she’s really worried about is ruining the gig by hooking up with the first guy to completely rock her world. She knows she should resist—Ramsey’s not the kind to stick around for a morning after. But the way he makes her feel—as an artist and a woman—could be worth any risk.