PIE IN THE SKY: The Lemon Meringue Challenge

By Pamela Sherwood May 12, 2016
Baking was one of the first things I learned to do in the kitchen--a pan of brownies, a tray of chocolate chip cookies, muffins, quick breads. (When I went off to grad school in another town, my mother was convinced that I'd starve because she thought--mistakenly--that all I knew how to cook were blueberry muffins! Unbeknownst to her, I’d also mastered meatloaf, spaghetti with marinara sauce, and white-cut chicken). 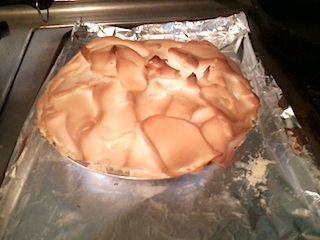 Transitioning from cookies to pies is a significant step, but not an impossible one. I usually turn out a couple of apple pies during the fall and winter, and a few peach pies (possibly my specialty) in the summer. In the last couple of years, I've added lemon meringue to the roster. Every pie presents its own challenge, but lemon meringue can be especially demanding because there are three separate layers to assemble, and if one of them is "off," the whole pie suffers. It could be a burned or still-doughy crust, lemon curd that's too runny or stiff enough to bounce a coin off, or worst of all, weepy, watery, undercooked meringue topping.

Sometimes I wonder why I don't just stop by Marie Callendar's or another local baker's when the lemon pie urge strikes. But there's something uniquely satisfying about turning out a perfect (or near-perfect) version yourself. And nothing tastes more like the embodiment of spring to me than tangy lemon curd topped with frothy meringue. So, every year around this time, I gird up my baker’s loins and tackle the lemon meringue challenge. Last year, the finished product was gone within two days, so I'd say it was a success!

Here's the recipe I use, cobbled together from several versions from different cookbooks. The success rate is fairly high, though there's always room for individual tweaks according to preference.

Preheat oven to 400 degrees. Cut shortening into flour, use pastry blender or two blunt knives to reduce shortening to pea-sized morsels. Mixture should resemble coarse meal. Sprinkle in sugar and salt, stir to combine. Add water, making sure all ingredients are moistening, then knead dough into a ball. Refrigerate at least 10 minutes. (Dough can also be made a day or two in advance.)

Sprinkle work surface with flour. Roll dough out until you have a large enough circle to fill a 9" pie tin.  Place crust on baking sheet in the middle of oven and bake for 10 minutes, then remove from oven and set aside. 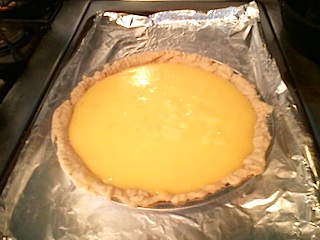 Mix sugar and cornstarch in saucepan, then stir in water. Heat to boiling, stirring frequently to avoid lumps. Carefully separate the egg whites from the yolks and set aside. Pour egg yolks in a separate bowl and beat until combined, then stir in half the hot sugar/cornstarch mixture. Pour egg yolk mixture into pan, stir until you have a thick, smooth yellow curd. Remove pan from heat, stir in lemon zest, lemon juice, and butter. Cover and set aside. 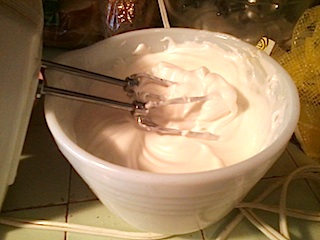 Beat egg whites and cream of tartar with an electric mixer until stiff and frothy. Sprinkle in sugar and continue to beat until meringue forms glossy white peaks that look almost dry. Add vanilla, beat until combined. 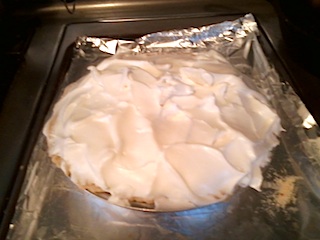 Pour lemon curd into semi-baked pie shell. Spoon meringue onto curd, spreading as evenly as possible. The lemon filling should be completely covered by the meringue, which should be spread to the edge of the pie crust to form a seal. Reduce oven temperature to 325 degrees and bake pie for 30 minutes or until meringue is a delicate brown on top. 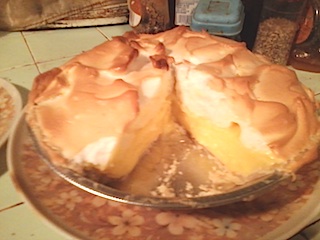 Remove pie from oven and cool for at least an hour at room temperature. Refrigerate for several hours before serving. Enjoy!