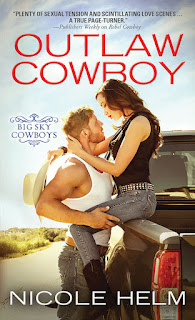 Happy release week to Nicole Helm's Outlaw Cowboy! To celebrate, Nicole's stopped by for a quick Q&A and to share an excerpt.


Question: Would you rather make headlines for saving somebody’s life or winning the Nobel prize?

Nicole Helm: It’s hard not to say for saving somebody’s life, simply because a life would be saved. How could you choose against that

“I know. I’m not comparing, Delia. I can’t.” He shook his head as his gaze returned to hers.

If she looked closely enough, she could probably see her own reflection, but getting any closer than this already too-close cab of his truck held zero appeal.

“But if you had something that was yours, that made you who you are, that gave you a reason to get up in the morning, wouldn’t you do everything to keep it? Wouldn’t you fight to keep the thing that made you feel like you weren’t a complete waste of space?”

She should look away. She should get out of the truck or demand he drive her to her family home. She should do anything but keep his gaze and let his words wrap around her heart and squeeze.

She didn’t have a thing that made her who she was, or a reason to get up in the morning—at least not once Steph was out. Yet she’d always kept plowing ahead, because no matter how bleak things were, she knew who she was. Strong. Resilient. And she knew, deep in her heart most of the time, that once she did her duty to her sisters, there would be something waiting for her on the other side.

She hadn’t planned on it being jail, but even in her darkest moments she knew even that would be a temporary thing, as long as she could get Steph safe first.

All the crap Caleb was complaining about was easier, but somehow sadder, because he didn’t know how to go on without this beautiful, amazing piece of land that made her feel an aching kind of hope.

Hope. Somehow, it kept her going. It kept people like them going. And all of Caleb’s was tied up in something that could be taken from him.

“I’m not expecting sympathy,” he said, his voice hushed and his eyes on hers.

She felt herself lean forward, as if there was some force pushing her there. Him or the sun disappearing in his eyes.

“I just want you to understand why I did what I did. Helping you isn’t an easy choice for me. It threatens my only chance at this. But I want to do it anyway.”

But she saw his battle, and that thing inside of him so lost he couldn’t find a center without the beauty that surrounded them, and that seemed more depressing than getting up every morning ready to fight. Thinking the only thing that made you worthwhile could be so easily taken away seemed worse than working to save people you loved. At least, at the end of the day, she knew she’d have her determination.

He cleared his throat. “Christ, Delia. Why are you crying?”

He reached out and touched his thumb to an unruly tear trailing down her cheek. She had a handle on the rest, but that one escaped and now he was touching it. Her.

Why were they so close? Why was she letting him be this close? Letting him touch her? She should push him away. Knock that stupid hat off his head while she was at it. She should do everything but lean into that gentle touch. It was a lie, a distraction, anything but something she could believe in or allow.

But somehow their mouths were close, and her heart was beating frantically against her chest, pushing her even closer to him. With his mouth a whisper from hers, her body completely warm for the first time since she’d woken up in the Shaw house this morning, he didn’t press his mouth to hers. He shook his head.

“I can’t do this with you.” But he didn’t back away, and when his eyes searched her face, they didn’t seem to mean that at all.

“But here you are,” she managed to croak out, sounding not at all like the cool, unaffected, kick-ass woman she’d like to be. Here she was, letting him swoop in, letting him touch her and affect her. “I don’t trust you,” she whispered, because she had to put that between them. She had to remind herself.

Why? Why did she feel sorry for him? He had everything, including all the power. But sympathy softened her heart against her will, because the jackass didn’t know himself at all, and that was damn sad.

She’d rather be stupid than sad. She’d rather feel than run away from it. So she did the stupid, feeling thing to do.

She leaned in and pressed her mouth to his.

BIG SKY TROUBLE
Ever since his father's accident, Caleb Shaw vowed he'd mend his wild ways, and he means to keep his word. He’s a changed man. A better man. And he knows he should want absolutely nothing to do with his crazy old life...or the maddening temptation that is Delia Rogers.

Because Delia? Is nothing but trouble.

Delia’s been stealing her sisters away from their violent father ever since she was old enough to fight back. But now with the police on her trail and all her bridges burned, there’s nowhere left to run but back into the arms of the one cowboy she knows she shouldn’t need. Caleb has always been too good for her, no matter how bad he claimed to be. Yet when close quarters turn into something more, Delia and Caleb are forced to decide what really matters: mending their reputations or healing their wary hearts...

Nicole Helm writes down-to-earth contemporary romance specializing in people who don’t live close enough to neighbors for them to be a problem. When she’s not writing, she spends her time dreaming about someday owning a barn. She lives with her husband and two young sons in O’Fallon, Missouri.