New Release: Lynnette Austin Every Bride Has Her Day

By Unknown May 06, 2016
Lynnette’s Tip for the Perfect Wedding

You’re getting married! A dream come true—and so much to do before you say “I do.” Above all else, preserve your relationship with your fiancé during the often chaotic planning of your wedding. Remember to enjoy this time and each other. The wedding is one day; the marriage is forever. On your dates, talk about more than the wedding and don’t let small details derail you.

Make your date nights special. Recreate you first date. Buy tickets for his favorite team and go to a ballgame together. Eat hot dogs and Cracker Jacks while you cheer on his football or baseball players. Try something you’ve never done. Adventurous? Go skydiving. Not quite ready for that? Tie on a pair of ice or roller skates and spend the night holding hands—and maybe holding each other up! Kiss often, and remember to tell him how much you love him. 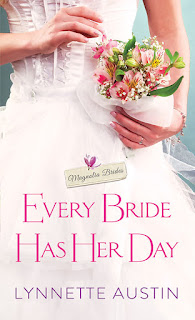 An excerpt from EVERY BRIDE HAS HER DAY:

“Hold on a sec.” Sam raised a finger and headed back inside. Grabbing the small radio he’d found tucked inside a closet, he placed it on the ledge above the sink, dialed up a station that played a lot of Frank Sinatra, and opened the window. The music drifted into the twilight.

In another cupboard, he found a stub of a candle in a squat holder. His aunt Gertie’d probably kept it in case of a power outage. It would do. He lit it and stepped outside to find Cricket curled up on the back porch swing, Hobo at her feet.

“So you decided to come home,” he said to the dog. “You’ve been gone half the day.”

In answer, Hobo thumped his tail on the porch.

“Yeah, I know. You heard steak was on the menu for dinner.”

Sam set the candle on a small side table, his system on high alert.

He didn’t understand it, but that didn’t seem to matter. Chemistry fairly sizzled between them.

He cleared his throat, then leaned down beside the fire circle. After he got a nice little blaze started, he pulled an old bench close. “I know we don’t need the heat—” He broke off. No, they sure didn’t. If they got within ten miles of each other, they generated enough of their own. “I mean, uh, I thought it might add a little ambiance.”

“Nothing I enjoy more than sittin’ around a campfire.”

“Have a seat then, and I’ll start the steaks.”

After he tossed them on the grill, he inched down beside Cricket.

The woman smelled like heaven. Or sin. He couldn’t decide which and slung an arm over the bench back. Hobo jumped up beside him.

Sam slid closer to Cricket to give the dog more room.

Hobo took it and more.

Those big eyes stared up at him, then Hobo threw his head back in an ear-piercing howl.

The dog answered with another mournful cry.

“Oh, for Pete’s sake.” He tried to move the dog off the bench, but he’d become a boneless, dead weight.

Cricket laughed. “I think we both know what he wants.”

He broke off as she laid a hand on the side of his face, leaned into him, and gave him a taste of heaven.

“Not enough,” he muttered, pulling her closer, dipping his lips again and angling them to take more. He trailed kisses along her neck, then moved back to her mouth. His hands moved down her arms, brushed the sides of her breasts.

A log dropped and sent up a loud popping and a shower of sparks.

He drew back and laid his forehead against hers, noticed, thank you God, her ragged breathing matched his own. “Cricket—”

“Shhh.” She laid a finger over his lips. “Let’s just accept that for what it was.”

Sam looked at the dog who, job done, had hopped off the bench and rested in the grass. “I’m liking that dog more every day.”

CAN LOVE REVIVE A WILTING HEART?
Cricket O’Malley can’t wait to plant roots back home in Georgia, where she’s returned to restore an abandoned flower shop to its former glory. The only blemish? Her neighbor’s house is even more neglected than her old flower shop, and its occupant seems as surly as he is darkly handsome.

Devastated body and soul after a tough case went south, New York City detective Sam DeLuca thought he’d have no trouble finding solitude in the quiet Georgia town of Misty Bottoms, but his bubbly neighbor seems determined to shine happiness into Sam’s life. Sam is equally determined to close himself off, but his heart says otherwise…

The luxury of staying home when the weather turns nasty, of working in PJs and bare feet, and the fact that daydreaming is not only permissible but encouraged, are a few of the reasons middle school teacher Lynnette Austin gave up the classroom to write full-time. Lynnette grew up in Pennsylvania’s Alleghany Mountains, moved to Upstate New York, then to the Rockies in Wyoming. Presently she and her husband divide their time between Southwest Florida’s beaches and Georgia’s Blue Ridge Mountains. A finalist in RWA's Golden Heart Contest, PASIC's Book of Your Heart Contest, and Georgia Romance Writers' Maggie Contest, she’s published five books as Lynnette Hallberg. She’s currently writing as Lynnette Austin. Having grown up in a small town, that’s where her heart takes her—to those quirky small towns where everybody knows everybody...and all their business, for better or worse.  Visit Lynnette at www.authorlynnetteaustin.com.