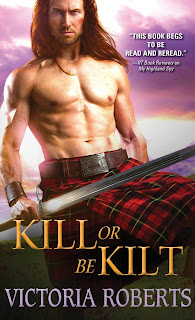 The third book in my award-winning Highland Spies series is now unleashed to the world. Yay! I'm so excited to bring you Laird Ian Munro and Lady Elizabeth Walsingham's story.

Here's the back cover blurb:
It's been three years since Lady Elizabeth Walsingham ended her childish crush on Laird Ian Munro, the fierce Highlander who scared everyone but her. She's a grown woman now, heading to London to find a proper English gentleman. But when the wild Highland laird walks through the door, she's that breathless youth all over again.

Ian tries hard to avoid the young lass who's confounded him for years. But now that they're attending court, he must keep watch on her night and day. Danger is at every turn and advisors to the Crown are being murdered. Ian soon realizes the girl he's been protecting is a beautiful lady who needs his help, almost as much as he needs her.

“Roberts’ newest Scots tale, filled with unique characters, sensuality, a colorful backdrop and an intriguing plot line, demands to be read and reread. Roberts knows her audience and delivers what Scottish romance fans desire. This is a tale readers can take to their hearts.”
—RT Book Reviews

"I adore this series, and as usual, Victoria Roberts has written another well crafted book with brilliant characters..."
—Night Owl Reviews TOP PICK

How about an excerpt?
In this scene, Ian is keeping watch over the camp, but Elizabeth can't sleep. She's pined after him for years, but he never sees her as anything more than a young girl.

“Why isn’t the captain of your guard traveling with us…with you?”

He chuckled in response. “He stays behind with my men to guard Munro lands in my absence. I can nae leave my clan and lands unprotected.”

“I understand, but what about your safety?”

“Now lass, ye would nae be questioning my prowess on the battlefield, would ye?” When she took a sharp intake of breath, he smiled, and she realized he was jesting. “Many men will nae approach or engage me because of my looks. Ye witnessed that nae long ago with the Sutherland guard. Sometimes being nae fair of face has its advantages.”

“I believe true beauty comes from within, and I don’t think men stay away from you because you think you are not a comely man. I’m certain their behavior has more to do with the fact that you’re the size of a mountain.” Brushing her skirts, Elizabeth wiped off imaginary dirt. “How many days will you be staying with us before you and my brothers-in-law attend court?”

“I doona know. It depends on when we arrive, a few days mayhap.”

“Have you been to court before?”

“Aye, more times than I care to count.” There was strong censure in his tone.

“I’ve never had the chance. Grace attended a few times, and then we moved to Scotland.”

“Ye’re nae missing anything. In truth, ’tis nay place for a young lass.”

“Then I guess I’m in luck because I’m eighteen now.” When a questioning expression crossed his face, she quickly rose. She wasn’t certain what provoked her sudden flare of temper, but between Uncle Walter, Grace, and the unexplained emotions raging within her about Ian, her voice became laced with sarcasm. “It’s getting late and past the bedtime for a young lass.”

Ian flew to his feet. For such a large man, he moved faster than she would’ve expected. He loomed over her and grabbed her arm to stay her. “Wait. That’s nae what I meant.”

There was a heavy silence.

“Then what did you mean?” When he didn’t respond and released his grip, she met his gaze. “Have a pleasant evening, Laird Munro.” She turned on her heel and did not look back. As she walked away, she almost laughed at the irony. That’s what she should’ve done years ago. At least now she was determined to leave the past where it belonged.

She was traveling home to England, and that’s where her future lie.