Welcome to Flash of Fire, the latest installment in the Firehawks series. Releases tomorrow, May 3rd. 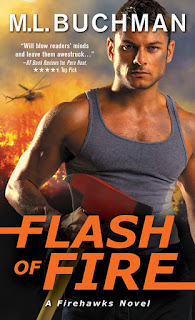 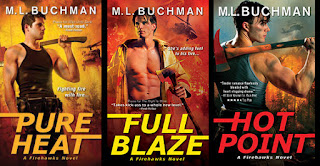 The heli-aviation wildland firefighters of Mount Hood Aviation have a problem.

Lead pilot Emily Beale can't fly this fire season. Hired as a one-season replacement, ex-National Guard heli-pilot Robin Harrow wears a chip on her shoulder about the size of the Tucson desert that she calls home. From a long line of single moms, who are just awesome thank you very much, she aspires to the same herself if she can just find the right pilot for the flight she's planning.

Mickey Hamilton grew up on the rivers of Oregon helping with his dad's raft-and-kayak guiding business. Robin spins his head worse than an auto-rotation landing in a bad firestorm. The heat between them burns so hot that its undeniable. But their hearts remain at odds until the fire burns so high that all other concerns are seared away in their race for survival.

An Excerpt
Mickey and Robin have just finished a horrendously long day, their first flying together. The heat and banter have been fun and a brief first kiss definitely left Mickey's blood moving fast. They are in the northern Yukon, watching the brief night of a summer sky masked by the smoke of a massive blaze they have come here to fight.


Mickey leaned back against his helicopter and let the exhaustion wash over him. Now that they were done with the day, he could let it in and it was a tidal wave. If he were a different man, he would seriously consider weeping. Or at least whimpering.

He didn’t know what he was waiting for until he saw the silhouette of a woman walking toward him through the twilight. Despite the impossibly long first day, she still moved the same as he’d initially seen her.

But her motion was like a dancer too, sliding easily through the grass. Not one of his sister’s delicate ballerina types with their waiflike bodies and impossible flexibility, but like those modern-dance types. All strength and fluid moves.

He was still puzzling at dancer or soldier when she stopped in front of him. There was just enough light to see her clearly this close up.

“You look like I feel,” her voice rough with exhaustion.

“I look like a beautiful woman? Aw, shucks, Robin. Though actually, I haven’t had a chance to figure out if you feel as fine as you look.” Yet. But he didn’t want to wait too much longer before finding that out.

She jabbed her finger into his ribs, but there wasn’t any heat behind it. Then she collapsed back against his Twin 212 so that they were leaning side by side and staring up at the sky.

The sky was a glorious blood red. The plume of smoke high above them glowed as if the sky itself was on fire.

“Not a lot of stars tonight,” he managed.

“I always wanted to see the Northern Lights,” she replied a comfortable time later.

“Need to wait for winter. I don’t think it gets dark enough in mid-summer here,” Mickey was pretty sure that was right.

He’d flown fires up here before with MHA, but he was too tired to trust his memories. And maybe the last time he’d seen the aurora had been in…August maybe, so there’d be more dark. Though wasn’t the Alaska fire season over by then? He couldn’t be sure.

His thought was cut off by the woman who rolled off her shoulder and lay against him, pinning him between her body and the helicopter. He was suddenly paying very little attention to the sky.

If she was going to offer, he wasn’t going to be dumb enough to hesitate.

He slipped his hands around her and pulled her tight against him. Yep! Definitely felt like he was holding onto a beautiful woman.

She offered a kiss and he leaned into it. She tasted of fire smoke and very faintly of grilled hamburger. But mostly she tasted of the impossible high-mountain freshness that so reminded him of home.

Because Dad was ski patrol, Mickey had often done last runs of the day with him. The whole ski patrol would take the lifts to the top, last up the mountain. Then they’d disperse to ski down every trail to make sure the mountain was clear. Sometimes, there was some hopelessly over-challenged beginner who had wandered onto a black diamond trail, but usually the slopes were empty and silent except for the slick sounds of their skis. The air blown in on the twilight breeze so clear and fresh that it was always a surprise.

It wasn’t just the wondrous slopes of her back and shoulders that he discovered as he trailed his hands over her. It wasn’t the unexpected softness of her hair or the roughness of her kiss. It was the freshness of her.

He wanted to roll her so that her back was to the helo and he could press himself more deeply against her, but her feet were planted wide and it didn’t seem worth the extra effort.

His hand was half down her pants, on the inside, before he caught what it was up to and reeled it back in.

Instead, he concentrated on appreciating her waist until she finally chose to break the kiss.

She lowered her head and he kissed her forehead.

“You seem to be cursing me a lot today, Robin of the Hood.”

“You seem to bring out the worst in me.”

“If that kiss was the worst, I can’t wait to try the best.”

That earned him a soft laugh. On most women that would have been a giggle. On Robin it was a friendly laugh, the kind that invited you to join in, so he did.

She placed her palms on his shoulders and pushed back until she was standing upright once more.

He let his hands slip from her waist and then didn’t know what to do with them. They’d felt so good placed on that nice dip between ribs and hip.

She blinked like an owl in the twilight and looked around, “I’m, uh, not sure which tent is mine.”

“Which one is yours?”

He pointed. Afraid that if he said, “the one on the end,” she’d be smart enough to figure out that they were pegged in the same order that the aircraft were parked. Betsy was good about doing that, knowing how exhausted a helo pilot could be after a day on the fire. Keepin’ it simple for you brain-dead dolts, she’d say time and again.

“I don’t really want to walk in on Mark.”

“Or Carly and Steve.”

“Or Carly and Steve,” she acknowledged.

He was about to run the list, “Or…” when she continued.

“But definitely not Mark. I’m still a little freaked by the whole him being a Night Stalker thing.”

“Well, I know where my tent is,” he tried to make it sound like her problem and not like the invitation he wanted it to be.

She looked back and forth along the tents once more.

He considered relenting, but he was rather enjoying teasing her.

Now it was his turn to blink at the woman slowly disappearing in the fading light. “Okay what?”

“Hamilton,” she sighed in exasperation. “You can’t be that tired.”

“Oh,” well maybe he could. But he’d get over that right now. He placed a hand in the small of her back, again resisting the urge to slip it down lower, and guided her toward the closest tent.

He let her crawl in first. By the time he had zipped up the mosquito screen and pulled off his boots, she was sprawled out across his sleeping bag. Dead out.

He undid her boots and then tried to decide just how much of a gentleman was he. Normally he was pretty good about things like that.

Whether it was exhaustion, the brief teaser of her incredible shapes and tastes, or that she’d laid right down the center of the double-wide air mattress he didn’t know, but he decided that this once he also didn’t care about being too decent.

He wrapped himself up close behind her, spooning her against his chest.

She hummed a little in her sleep as he wrapped an arm around her waist. She slid her hand over his and then pulled it up toward her chin, as if he was a sheet and she was tucking herself in.

But she didn’t quite complete the gesture before falling back asleep with her hand lightly pinning his in place.

Mickey lay there with her back against his chest, his nose tucked into the soft wood smoke-and-mountain air wonder of her hair, and his hand full of a truly exceptional breast with nothing but a thin cotton t-shirt separating them.

Well, if Vern was smart because he’d kept Denise tucked tightly under his arm, then Mickey was feeling pretty smart too.

Wide awake and turned on as hell, but very, very smart.


M. L. Buchman has over 40 novels in print. His military romantic suspense books have been named Barnes & Noble and NPR “Top 5 of the year” and twice Booklist “Top 10 of the Year,” placing two titles on their “Top 101 Romances of the Last 10 Years” list. He has been nominated for the Reviewer’s Choice Award for “Top 10 Romantic Suspense of 2014” by RT Book Reviews. In addition to romance, he also writes thrillers, fantasy, and science fiction.

He is now making his living as a full-time writer on the Oregon Coast with his beloved wife and is constantly amazed at what you can do with a degree in Geophysics. You may keep up with his writing and receive exclusive content by subscribing to his newsletter at www.mlbuchman.com.